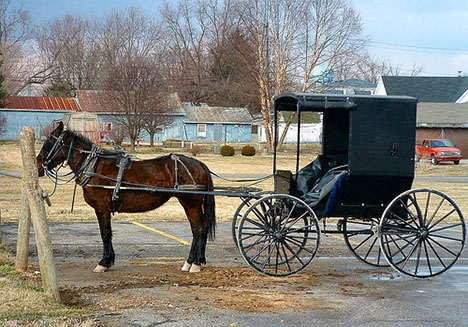 Did I take this photo? It's driving me nuts. Reader Cam noticed a water tower in the background, obscured by trees. Couldn't really enlarge it enough to see a name on it....

SIGH, I had a post yesterday about a "mystery photo."  It's of a horse and buggy that I posted on my site, the photo is reposted above.  Problem is, I have no recollection of having taken it or where.
Now, that in itself is understandable, I suppose.  I've been in Amish communities all over the United States and Canada, I suppose I can forgive myself for snapping a single photo of a buggy and not remembering years later where it was. Still, I do have an amazing sense of place and rarely forget a place if shown a photo.

Some of you were intrepid enough to search for the photo online and reader LH found it here.

I glanced at the photo on my phone when LH sent it to me yesterday and kind of shrugged.  It's not unusual at all for other sites to crib my photos.  Some bloggers get bothered by it, I don't really lose much sleep over it, though. Consider it a compliment.

I don't, as a rule, "crib" photos from other sites, certainly not without identifying it as such. I'd have no reason to crib a horse and buggy photo from another site, I have a gazillion of my own. I looked at LH's link again this morning, though, and saw that the photo appears on that site in 2008.  Now that is interesting.  The "modern"  version of this website didn't really begin until around 2010.......I don't think someone really could have cribbed that photo from my site in 2008 because I don't know that I really did all that many photos, etc back then. I don't know, SIGH, the mystery deepens.  I had really thought this photo might have been taken by me in Sinking Spring, Ohio, but if this photo was around as early as 2008 then that can't be possible because I didn't first visit there until 2013.

I'm beginning to lean towards the theory that I didn't take this photo at all, that it just somehow ended up in my photo files.  Still, if someone recognized where, then I could tell you for sure whether I took it or not.....Not that it really matters a whole lot....buggy photos are a dime-a-dozen, I'm more just curious....

« Amish in the News: Amish Support A Play, Simply Believers, and Funny Cake
Bologna Bliss - 4 Amish Recipes and One Great Bologna Sandwich You Can Buy »