I've spent over 25 years exploring Plain communities in various capacities.  My book, Not So Simple tells the whole, true story.  If you missed yesterday's excerpt, here it is.   What follows will be the last excerpt until the book is one day published. I think it will be.  The question is when?  Life is often about timing and it just has to "feel right" to release it.  This excerpt occurred when I was 17 and I was a young journalist already working for magazines and newspapers.  This  and yesterday's excerpt is lifted from a spot about 10 percent of the way into the book, the references to the Middle East in this excerpt tie back to something very early in the manuscript.  As many of you know, I spent many childhood years in the Middle East, so that is what that is referring to.  So continued from yesterday: 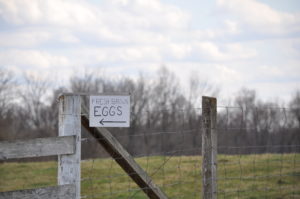 In addition to the young girl with her nose still pressed to the window, I scanned the bowl and saw much activity: a boy pulling a cart with freshly cut firewood, an older girl carrying buckets filled with fresh milk, and a teenager hauling hay.  This seemed like a perfect place to work on my magazine article, so I gathered my courage and talked to the parents about profiling them for publication.  The patriarch had just come in from a barn to see who their visitor was.  The patriarch looked vaguely familiar, but nothing registered.  My years guessing ages had come in handy, I pegged him as being close to 40, and I would turn out to be correct.  No prize for him at the Fool-the-Guesser booth.  His beard was long and dark, with not a speck of gray.   I explained that I was on assignment with a children’s magazine (it helped that they were familiar with the publication) and that I was looking for an Amish family to spend some time shadowing.    Perhaps because I was so young, and looked younger, the parents felt a bit less threatened and intruded on than they would have been by an older more seasoned journalist. The parents huddled in the kitchen, while I waited awkwardly in the living room. I overheard them whispering words to one another that I couldn’t recognize.  Turns out they were speaking German, although many Amish erroneously refer to their dialect as Pennsylvania Dutch.  Most Amish speak this dialect amongst themselves and English in front of outsiders.  It’s a way to preserve their religious and cultural heritage, in much the same way that French continues to keep Quebec separate from the rest of Canada. 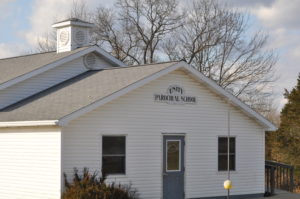 An Amish school in Adams County,Ohio

After several suspenseful minutes of hushed deliberations, a verdict was rendered.

“I think this would be okay, you can work on your article here,” the man said rather formally, extending his hand.  “My name’s Roy Bontrager.  This is my wife, Emma.  She’s the one that makes the great bread.”   They took me outside to introduce me to the rest of the family.

An attractive teenage girl in a sky-blue dress, a lock or two of golden hair peeking out from under her white bonnet, sat at a picnic table under a sprawling oak.  She was peeling potatoes with one of her sisters.

“See how big those potatoes are?  We harvested them from our own garden” Mrs. Bontrager said, beaming.

The barefoot teenager looked up at me with a quick smile and then went back to peeling.

“This is Kevin Williams, he’s going to be writing about us,”  Mr. Bontrager said.

“Hopefully, you’ll write good stuff,” the girl said with a playful giggle as she peeled, her toes digging into the dirt beneath the table.

“Would you like a slice of homemade bread?”  Mrs. Bontrager suddenly offered, waving me into the kitchen.

Before I could answer, a pale blue plate with a soft slice of generously buttered bread on it appeared.

“The loaf just came from the oven,” she said.   I devoured the still warm bread.  Between bites I’d glance out the window at the pretty girl peeling potatoes.  I was thinking that I hadn’t eaten bread this fresh since the Afghani woman and the stone oven.  Her livelihood was probably long-gone, bulldozed for a modern western-style shopping mall which had begun to replace the souks. The thought saddened me.   But I was finding that just as shwarma and baba gonoush knocked down cultural walls in Arabia, so too did homemade buttered bread in Amish country.

“We used to sell bread and pies down along the highway, but business got so good that we moved to another location,” Emma Bontrager said.  I glanced over at Emma’s husband.  It was him, it was the same man who was running the roadside stand when my parents had visited years earlier.  “Now the only day Roy spends here at home is Saturdays, most days he is at the bakery and I’m here baking bread.”

“I remember stopping there with my Mom and Dad several years ago.  I was upset when I saw that you were no longer there, but instead it sounds like your business has really grown,” I said.

In the weeks ahead I would spend a lot of time with the Bontragers.  I’d usually spend Saturdays there (I still worked at the Middletown newspaper during the week) and then head back to the comforts of home to work on the magazine article in the evenings. The Bontragers were a typical Amish family, if there is such a thing.  Amos, age 20, a tall, tan, lean young man already weathered by work was the oldest child.   Levi, age 14, was shadowing his older brother and wanted to pursue a future in farming.    Daniel, age 9, was a straw-hat, suspender-clad bowl-cut boy who spent the summer scampering after fireflies and tagging along on farm chores with his older brothers.  Seven year old Emma and five year old Sarah, clad in a colorful headscarves most of the time, seemed older than their years. Sarah would run shoeless through thistle-filled fields to round up livestock and help her Mom with sewing and baking.   Many younger Amish girls forgo the traditional bonnet for a simple scarf.    But it was Anne,  17 , who corralled most of my attention