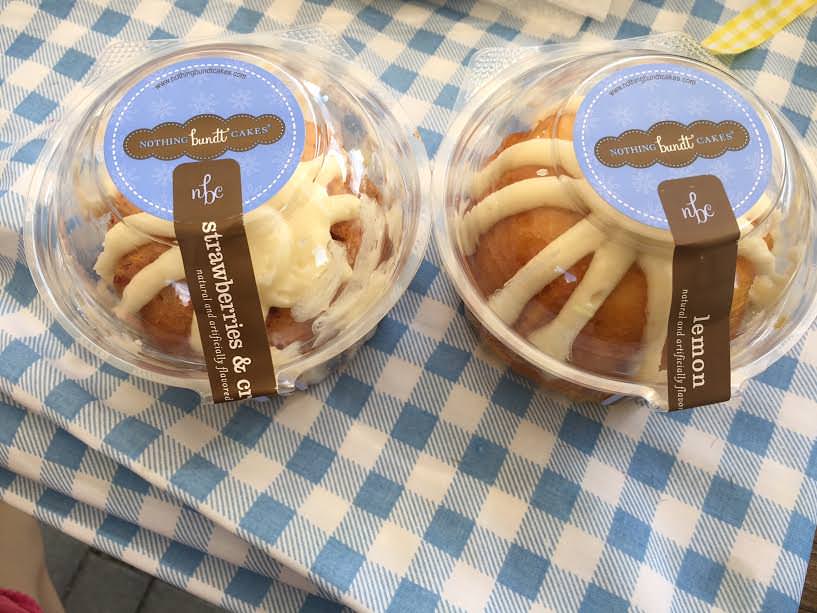 Bundt cakes - strawberries and cream and lemon - from Nothing Bundt Cakes...they specialize in these small mini-cakes.

I first saw this store in a trendy suburb of Cincinnati last summer as it was preparing to open.  Fast-forward to this summer and it's now open and serving up, as the name implies, bundt cakes.  Lots of them.

I don't know, I don't want to be a curmudgeon or negative, but this just seems like a food fad. I know bundt cakes have been around forever, it's not such much the food that it is a fad, but the format...these restaurants that specialize in one item: grilled cheese, cereal, and on and on.  I just can't imagine "Nothing Bundt Cakes" being around 20 years from now, but maybe I am wrong. I certainly don't wish business ill on the chain.

The cakes ARE good.  No question about it.   My mother-in-law brought some to our Mother's Day picnic over the weekend (Mom shouldn't have to cook or bake). But I still think this sort of format is fraught with peril.  Again, the cakes are good, but a homemade cake from home, in my opinion, is probably lots better.    Bundt cakes have never been my favorite, with one exception...my Mom used to make some when I was little that were filled with a layer of creamy pudding.    Mmmmm, now THAT was a good bundt cake.   Holy cow, I just looked at the Nothing Bundt Cakes website and they locations ALL OVER....   It just doesn't seem like you'd be able to replicate homemade, your own kitchen quality to the cakes if there are that many bakeries (I realize the cakes are baked in-store each place)

This was a prune cake I saw in a Mennonite bakery.  Check it out and the recipe here.

And here is a Bundt version of Amish Apple Sauce Cake.  Check out the recipe here.

Other "best of Bundts" from Amish365:

HOLIDAY PEAR CAKE: I had some readers get mad at me for calling it Christmas Pear Cake. Click here.

AMISH PUMPKIN CAKE:  I know it's not pumpkin season, but this is a good recipe year-round.

AMISH DREAM CAKE:  Geez, I don't know why I even bothered to post this back in 2014 because there isn't much context to it,  I guess I had just sampled an "Amish Dream Cake" but I sure wish I had taken a photo or something.  The recipe sounds interesting.  Click here to check it out.