It was about 3:00 p.m. when we reached the traffic jam that is Berlin, Ohio in the summer. We found parking in the Berlin Village Gift Barn lot behind the antique mall. We made a quick tour of the store inhaling the aroma of scented candles and potpourri and decided to investigate the touted Schrocks Heritage Furniture store. Having seen some samples of beautiful Amish craftsmanship, I was eager to see a whole showroom of quality furniture. Schrocks did not disappoint. I found myself caressing table tops and gawking at the solid wood beds and chests made from cherry, maple, and walnut.

Thinking we had more time than we did, we headed across the street to the antique mall. Being an avid antiquer, I was on an unsuccessful quest for items on my collectables list. I knew we’d have to finish our browsing the next day since Berlin stores close up shop at 5:00 Back in the tourist traffic that eases its way through the commercial area of Berlin, we headed to the elusive town of Mt. Hope on Rt. 77 north of Berlin. Actually, “town” is a misnomer. It is more like a very small village at the crossroads of Rt. 77 and Ohio Rt. 241. A word to the impatient: if you’re in a hurry, Holmes County is probably not the destination for you. I saw no real difference in the quality of the Ohio roads verses the county roads. Both wound around hills and doglegged around white fenced farms. A slow speed is mandatory since over the brim of the next hill could well be a buggy with smiling children waving out the Mrs. Yoder’s Kitchen is only open Monday through Saturday until 8:00 p.m. so arriving as we did shy of 6:00 p.m., we were met with tourists and locals alike who filled the large rooms during the dinner rush. Mindful that some Amish do not like their pictures taken, I inquired if I could take a picture of the food. I was assured that there would be no problem. 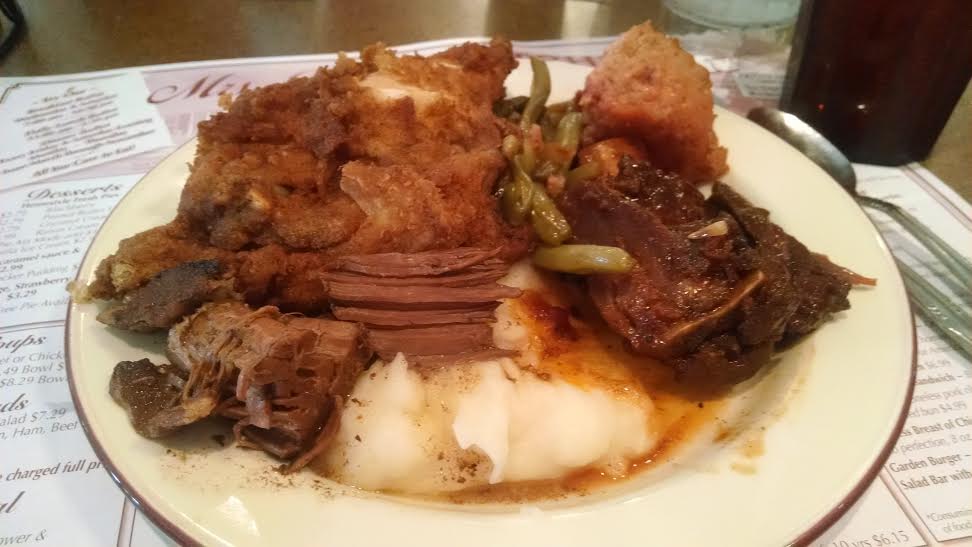 The menu ranged from the home-style favorites of smoked ham steak, pot roast, and country fried steak to Teriyaki glazed salmon. One of our party chose the roasted turkey while the rest of us were lured to the Wednesday night all you can eat dinner buffet. The buffet should come with a warning that dissuades any diner who has eaten previously during the day.Luckily, I had skipped lunch.

I began my meal with a trip to the salad bar that included a full range of toppings plus both red and yellow pickled eggs. When I’d filled my plate and doused the salad with blueberry vinaigrette dressing, I made room for a scoop of broccoli-peanut salad that proved to be my favorite. From there, I tackled the dinner buffet.

I put a hunk of tender, juicy pot roast on a scoop of real mashed potatoes and added a broasted chicken breast. That’s when I saw the fall-off-the bone barbequed ribs and an old time favorite, ham loaf. I had to have a little of each. I was about to leave with my obscenely filled plate when I spotted fried green beans with onions. Rearranging the chicken breast, I made room for a small spoonful of the vegetable. I walked ashamedly back to our table and dug in. The first thing I noted was that Yoder’s pot roast was far superior to anything I’d made at home. I also regretted that I’d been enticed by the crunchy skin of the chicken after I’d tasted the ribs and the spicy ham-loaf. I did not regret making room on the plate for the green

I did not want to make a scene or I would have begun jumping up and down to make room in my stomach for the desserts. Instead, I opted for a taste of what my husband brought back. I took a bite of the Oreo pudding and reasoned it was made with more whipped cream than pudding it was so light. I moved on to the caramel cheesecake which had the consistency of custard and a flavor to die for. Totally stuffed, I took a small bite of the dark chocolate layer cake from which the icing was missing. My husband had eaten it all. It must have been good.

Paula Cohen is an Ohio author.   Her latest book is Book: The Memoir of a Dysfunctional Dog.