I have many fond memories of being editor of this column over the years.  One memory that strikes me as particularly interesting was how I would get a hold of Elizabeth Coblentz during the early 1990s.   She would hand-write the column and mail it to me.  I have more modern methods of reaching Lovina today.

But her mother was from a different generation and lived in the much more conservative Swiss Amish community near Geneva.   I remember a time or two when I had a question about her column that I needed her to answer but I had no way to reach her.  I think I had a question on a recipe that was a bit unclear.  This was in the days before the internet when you could just Google a recipe.

Elizabeth had no phone and I was on deadline to get the column out. I think I called my grandma to ask her the recipe question, but she didn't know.  So I got the idea to call a florist local to Elizabeth.  It was a place called Edelweiss.

I asked the proprietor how quickly she could get a cheap basket of flowers out to Elizabeth's address.  She said she could have it done before noon.  Perfect, my deadline was around 2.

"So, what shall the message on the card be?"

"How much sugar is in the pie recipe? Please tell the driver."

"I know that's a strange message, but that's the only way I can get a hold of her. And can you please make sure she reads that card before your driver leaves."

I tried to explain to her but I think it fell on uncertain ears.  Nevertheless, she attached the card to the cheapest basket of daisies they had and gamely dispatched the delivery driver who came back with an answer for me within an hour or so.   At $20 it was about as costly - but quicker - than a FedEx.  I met my deadline and all was well.   In the future, for such time pinches, I switched to pizzas a time or two.  I thought later about using carrier pigeons to deliver messages.  I had heard stories of generals using them during World War II to take messages to the front-lines.   I remember calling the national headquarters of the American Racing Pigeon society and describing my dilemma to the person answering the phone.   He said my idea was fine, but I'd have to have a colony of pigeons on both ends, one at Elizabeth's and one at my apartment and it all just seemed so complicated.  It's nice that more and more Amish have phones these days! 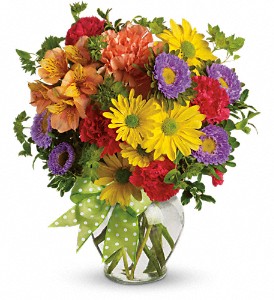