It is summer time so that means vacation and exploration.  Amish families are just like any other, with the kids out of school, it is a good time to hit the road.   Not by buggy, if you're Amish, usually by bus or van.  Vicki was nice enough to share this fun photo from Niagara Falls.  While I don't encourage people to go around snapping photos of Plain people (or anyone you don't know for that matter, I think it's a respectful photo taken in a very public place..faces aren't visible, I wouldn't post it if I thought otherwise)   Some background from Vicki about their encounter with Plain people at the falls:

"We kept running into a large group  as we were walking around the American side. Or possibly there were more than one group because they were scattered throughout the park. They seemed to be having a wonderful time. We did the Cave of the Winds with a group and even happened to take a trolley ride around the park with about a dozen of them. I really enjoyed hearing them speak their own language to each other." 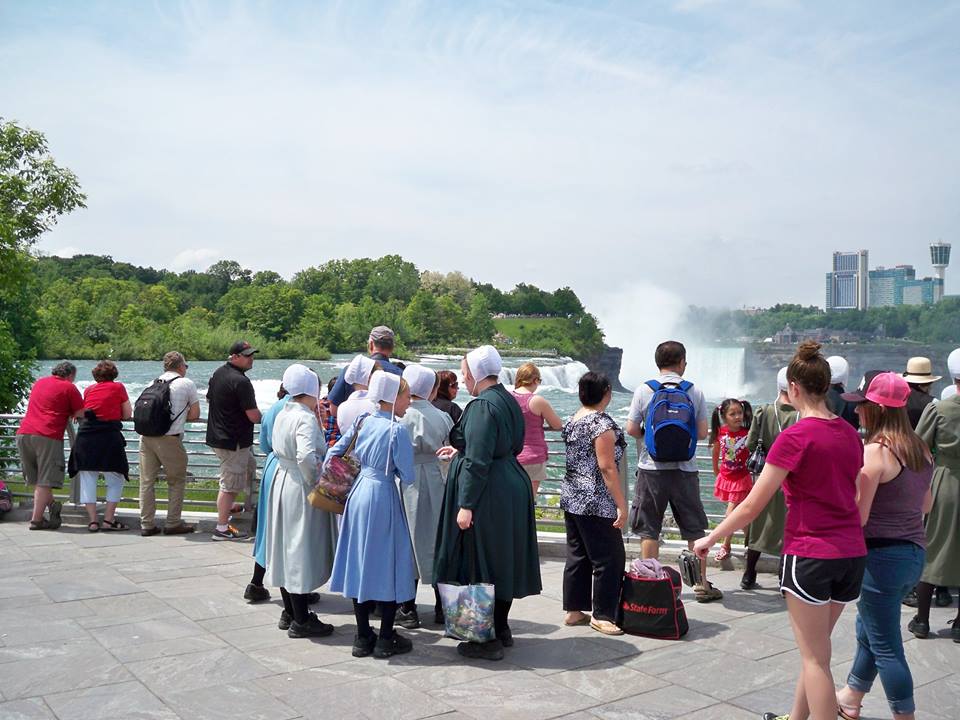 At first I just assumed Vicki had run into some Amish tourists, but now I'm not sure sure.  They could have been Old Order Mennonites.  Mennonites do speak German among themselves generally.  The men in the group had beards, which would seem to indicate Amish.  But Vicki reports the girls wearing flowered dresses, which would seem to fit Brethren or Mennonite.  So I am not sure which Plain sect she saw, but it's a fun photo nonetheless (the women in the above photo are not Brethren, that is for sure. You can tell by the kapps. Quite possible that Vicki ran into several different Plain groups at the Falls since that is such a popular tourist stop).

How many of you have been to Niagara Falls?  The water volume going over those falls is amazing, just stunning.  The Canadian side, I think, is more enjoyable for a variety of reasons.  But for Amish tourists, many probably without photo identification, crossing the border is more of a hassle than it used to be.