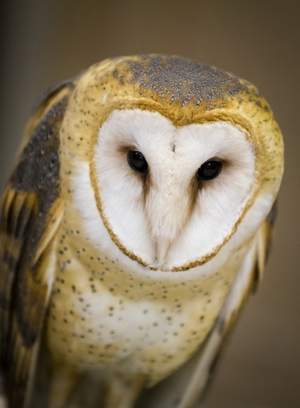 Editor’s Note:  Rosanna mailed me a memory stick with what will probably be superb photos of her barn owl, but so far I’ve been unable to open her files.  As soon as I am able to work out the glitch, I’ll post photos in a separate entry and let everyone know.  In the meantime I dug up some old stock photos to go with this. – Kevin

I thought I smelled a rat. But I was too chicken to stick my head up in the attic of the outbuilding to check. I was pretty certain that doing so would bring me face to face with a large rodent. So I, like any good female, left the rodent work to my dad and asked him to throw some poison up there. Dad, however, was no more excited about doing the task than I was, and so whenever I walked past there in pre-dawn darkness I could still hear squeaks and thumps from little baby emitters and I was sure it smelled like a rat nest. 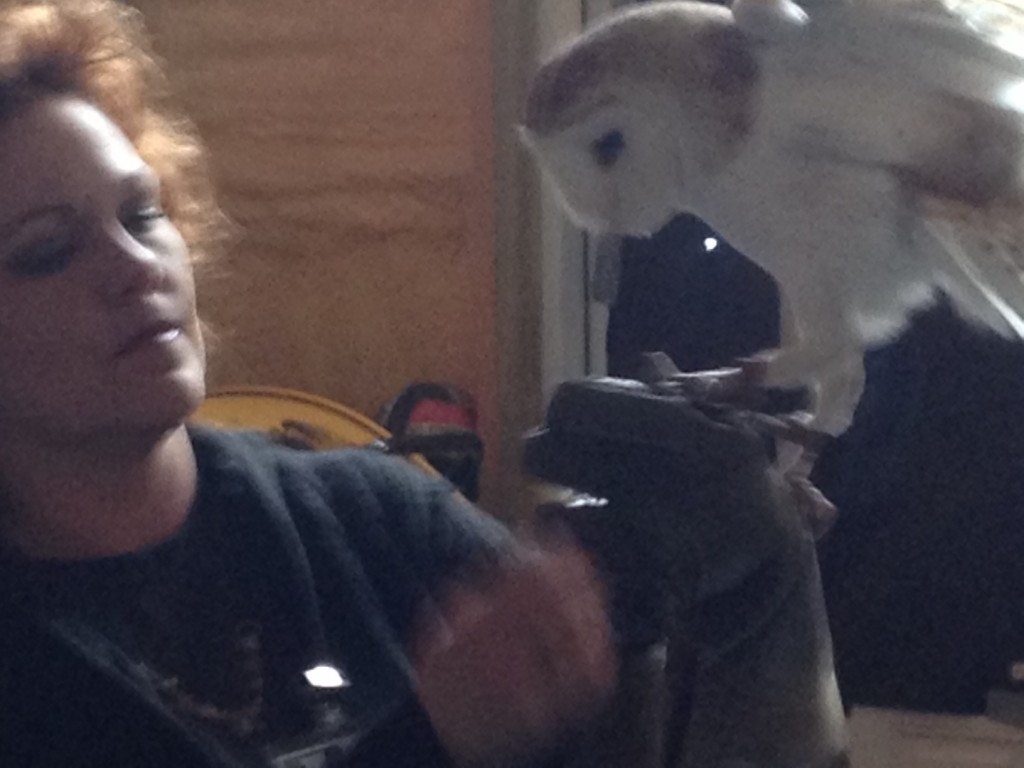 That is, until I went out to fetch something  after dark this summer. I was pretty focused on my errand when  my peripheral vision  noticed  a flash of white.  I stopped dead  in my tracks.  I was six feet from a barn owl perched just above eye level. I wasn’t about to waste a good nature photography opportunity. The barn owl flew away when I snapped it’s picture and a chorus of frightened squeaks and chirps erupted from the ” rat’s nest”. Hmm. Now I was suspicious that the “rat’s nest” was a nest of an entirely different sort. I was determined to check it out, so I fetched a flashlight and step ladder. As I neared the top of the ladder, I heard a hissing sound that I had previously attributed to a leak, and it began to sound a lot more like a big, scary animal on defense. Mamma Owl roosted in a window on the barn behind me, drilling holes in my back with her big beady eyes. I had already seen just how sharp and powerful an owl’s claws are, so I was very nervous that she might try to attack me if I got too close to the  nest.                                                  Sure enough, my flashlight revealed some fiery surprised baby owls. Babies that hissed in fright and wagged their heads in reprimand for daring to  intrude

upon their private abode. Before this encounter with the owls, I thought that all owls   hooted.

These owls have hissed, squeaked, screamed and chirped, but not one hoot. Upon reading the bird book, I found out that this was correct for barn owls.

The owlets were so cute huddled in the corner with white fuzz and big black eyes! I immediately regretted my Jack of courage to check out the supposed rat’s nest. These babies had almost all grown into their feathers and I feared it would not be long until they left the nest. It would have been so amazing to photograph these owlets as they grew. Here I had passed  within three feet  of their  nest at  least ten times  each  day!  We knew we  had barn owls. I didn’t mind them because they were really good for pest control and with all the grain we have around here, that’s a good thing. But I had always thought that barn owls were the most unattractive of the owl family. They had theses shockingly white, heart-shaped faces that gave them a ridiculous appearance when all the other owls that I’d had close encounters with were very majestic. We’d seen them in our grainary, and spotted them perched along

the ridgeline of our barn at night. But we had no clue that the owls were that close to us with a whole nest  of cute babies!

Then a terrible thought hit me: If mamma owls were protective of their young, would she start swooping on customers when they arrived to pick up their chickens? Her nest was right over the poultry loading dock, after all! We’d have to post a warning sign that declared “Beware of Attack Owls!” Thankfully, this scenario never happened, but my concerns about attack owls aren’t totally unfounded. Most of the times the owls and I just trade friendly stares. But if the mood strikes them, a casual stroll from the house to the barn after dark could be a little unnerving. With a sudden, loud scream, the owl swoops down from the darkness passing mere feet from my head. There’s more than one reason we encourage our customers to pick up their products before nightfall…

We excitedly showed our meat inspector this nest right above our plant entrance, but he thought we were taking “natural pest control” a little too literally and that it wouldn’t qualify as an official pest control program. Nonetheless, we are as pleased about our resident owls as we were about the bald eagles and showed them off to every random farm visitor.

I am slightly chagrined that I have become so interested in an animal that I thought was rather ugly and uninteresting. This is not the first time that I have experienced this, and I suspect that God must delight in showing me that all of His creation is amazing. Oh dear, I’d better not speak harshly about the buzzards or that will be the next lesson I learn. I just can’t imagine ever being in awe of a rat or snake or stinky buzzard. But you never know…