CAPTION: Prince Edward and Alberta? Probably not, but you never know (stock photo) 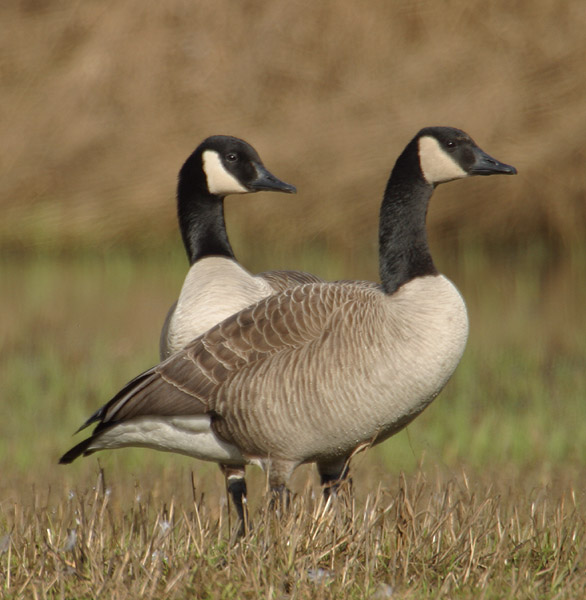 Canada Geese on the Bauman farm in Kansas

Our farm is only 3 /4 mile from a large lake that provides a nice habitat for wildlife. Every now and then, some of the wildlife will drop by the farm for a visit. We haven’t done any official cataloging but most wild life watchers would be impressed with the variety that we’ve seen. We feel honored that  various animals and birds consider us a safe place but they usually decide the pristine acres at the lake are better suited for their residences. But none of our visitors have won our hearts quite like the ones we had last August.

Just before the sun rose on a Wednesday morning the last of July, I rushed from the chicken dressing shed towards the house to fetch the newpaper. It was processing day and this was the first of many mad dashes that I make between the house and processing plant. Fortunately my abrupt departure from the building startled some visitors on the driveway otherwise I would have never noticed them. Mouth agape I looked back over my shoulder to be sure I’d seen correctly. Yes, that was a young Canada goose I had just run within 3 feet of.  Once inside the house I reported the news to the family. We frequently have Canada geese make our farm their home, but they stay far away from us. This fowl had not flown away when I had startled it, so we surmised it must be one of our neighbors geese that they had hatched from wild geese eggs. Their farm is three miles southwest of ours but we had  received a visit from one of their tame Canada geese once before. When our neighbor, Esther, came a couple hours later to help us process birds, the goose was still hanging around the entrance greeting our startled employees as they arrived.

Is that your goose again?” we asked Esther.  “No,” she replied to our surprise. “Our geese are not even that tame!”

By  that time a second young goose had joined the first. We were a little unsure what to do with these mysterious geese that were nearly read y to walk into the dressing plant.  My 12-year-old sister Joanna gave them some grain and a water pan to keep them out of the way of incoming trucks hauling chickens.

The chicken customers gaped at the pair of wild geese that stood unconcernedly in front of their truck even after they had honked their horn. We figured they would fly away as the day went on, but they seemed to be settling down for a stay. The pair even wandered back to where the construction crew was noisily erecting our processing shed addition and calmly waddled around stacks of boards and nosed the power tools.  The birds changed from oddities to our resident source of amusement. We laughed at them standing in their individual basins of water to cool their feet instead of using the pond. We marveled at their lack of concern over our dogs. Joanna left the back porch door open to see if they really would walk indoors. They did! Since they seemed  to be adopting us, we surmised they were male and female. We decided on a names for them; Prince Edward and Alberta, the Canada geese. Our suspicions were confirmed when the goose we thought looked like a teenage gander curiously stuck his head into the open barrel of oil in the shop.  Only a male would be attracted to oil like that!

CAPTION: Rosanna's sister, Joanna, with a catch from the farm pond. Good for the goose?

The mystery of their origins was solved a week later when I chanced to mention our unique visitors to a city employee.  She informed me that the previous week animal control had been called out to remove a pair of young geese that the residents of the nursing home had befriended.  The control officer had relocated the birds outside of town at the reservoir so that they could unite with their kind.  However, the pair must have thought the lake scene was “roughing it” a little too much.  And to their great delight found civilization less than a half mile away that even had grain suitable for geese.

“Well, that’s the last we’ll see of them,” we thought. Sunday afternoon, Prince Edward and Alberta returned.  They had apparently just gone away for the weekend to the lake, as a lot of other people do in August.

They were unusual geese, never really becoming interested in our ponds or the other geese that flew by.  The four-wheeler was an attraction, however.  They seemed to enjoy taking a spin with the four-wheeler, flying along next to the driver’s shoulder. After a couple of weeks we learned to expect the geese to leave the farm on Friday afternoon and return on Sunday afternoon.

Then one Sunday passed with only one goose returning – Prince Edward. We noticed and worried.  On Monday afternoon we glanced outside, just in time to see Alberta fly in and land clumsily. Her leg was lame! She let us walk up to her and examine her leg. It didn’t feel broken, but perhaps it was dislocated.  That past weekend was a particularly busy one at the lake, so we suspected she was hit by a Jet Ski. We fixed up a spot for Alberta to rest and recuperate, and Prince Edward did a good job taking care of her that week. We wondered what would happen on the weekend – would he fly off to the lake?  To his credit, he stayed home that weekend. By the next week Alberta was improving and walking around a bit so the Prince departed. He did not return on Sunday  and Alberta knew it was past time for him to be back because she suddenly got very lonely and depressed.  She would hang around the back door and honk plaintively whenever someone came out of the house. She followed us all around the farm, limping and lonely that week. She scared a customer’s three year old son when she advanced upon him lurching and honking, looking for a friend. He screamed and ran for his mother

Prince Edward did not return that weekend either. On Wednesday our employee Esther departed for the lake on her tractor. Alberta perked up and ran down the road after her, then lifted into flight. She flew right beside the tractor, near enough to touch her wing  until they reached the lake.  Alberta landed roughly, her leg still not completely healed.  She then swam off to find Prince Edward. We haven’t seen them since but  we wonder if they won’t choose Cedar Valley Farms to raise their first family. Come spring when thegeese are nesting we’ll be watching for a certain Canadian duo.