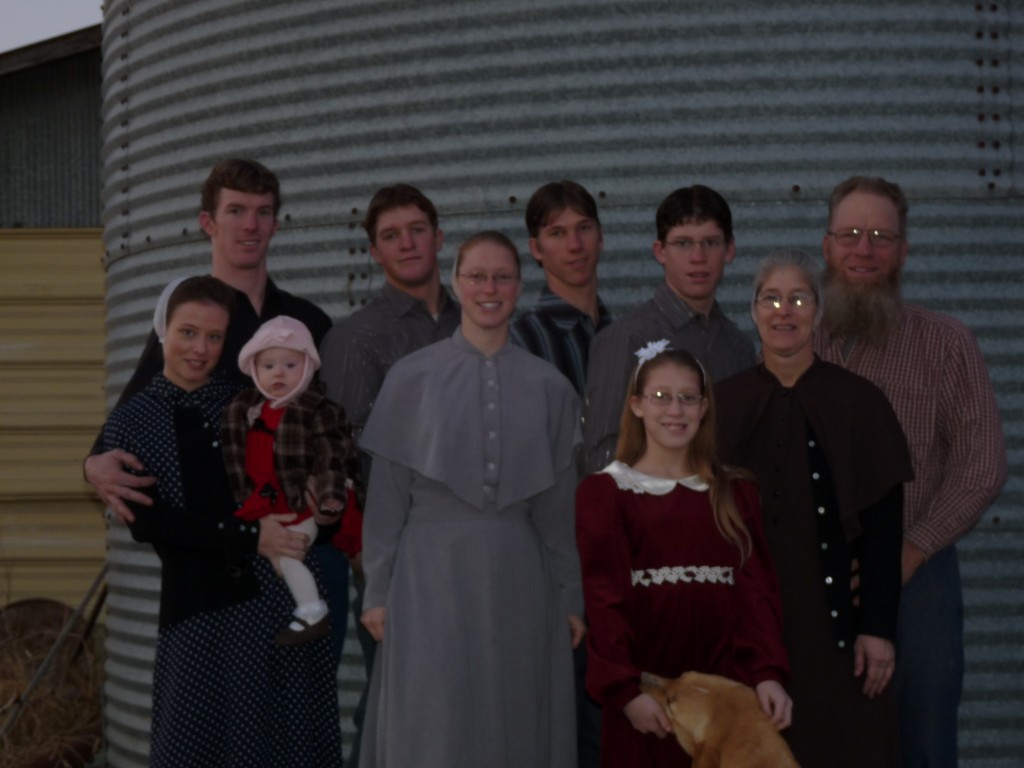 Plain Kansas: the Bauman family. Rosanna is front and center in the gray dress flanked by her family.

An Introduction to Plain Kansas

Who am I? Well, that’s a question I still ask myself, and Plain Kansas is not about me, it is about life on a Kansas Anabaptist family farm. And any stereotype you may have about Kansas or Anabaptists or family farms, I am sure that we don’t fit it. So, please excuse me as I de-bunk myths…(Editor’s note: Rosanna is front and center in the gray dress in the above family photo)

Kansas Our home is near Garnett, in eastern Kansas. We are neither flat, nor treeless, and I am still hoping to see a real, live tornado. None of our dogs have been named Toto, either. As a native Kansan, I do enjoy scaring out-of-state folks with tales of our wild weather. Kansans are survivors and are staunchly loyal to their state in every flaw and beauty. This column’s title says it all: Plain Kansas. We are pleased with the state’s plainness, it lets us slow down to catch her shy beauty and stunning simplicity.

Anabaptist For those unfamiliar with this Christian faith, it is the name given to groups of Christians during the Reformation who did not support infant baptism, but rather practiced believer’s (adult) baptism. Several groups such as Amish, Mennonite, Quakers, Huguenots, Moravians, and the Brethren held this belief. Commonly mistaken for the more-known Amish or Quakers, our church has no historical ties to these groups, despite some similarities. As adherents to the Old German Baptist Brethren faith we have chosen to not use television, radio, or internet in our homes or businesses. But we no longer speak the German language, and we do use vehicles and electricity. We recognize the simplicity of salvation, and it is from this that we take our practice for a plain and simple lifestyle.

Family Farm If the first thing you think of as a family farm is Almanzo Wilder’s boyhood farm, think again. We started farming only in 2001. This farm has not been in our family for centuries, we are relative greenhorns. While my mother, Yvonne, came from a solid line of farming families in Indiana and Pennsylvania, my father, John’s lineage, is of displaced farmers who had the misfortune of trying to farm ground in Hollywood and Modesto, California before the cities swallowed all the ground. John and Yvonne finally got the chance to farm- at age 40, with six young children! It was, of course, generally regarded as a crazy idea, but John and Yvonne knew that they had six children (ages then ranging 14-1 years) to keep busy. So we moved, named our new land Bauman’s Cedar Valley Farms, and became farmers. Every year since, we have survived only by a series of miracles. We are the classic food-rich, cash-poor farmers. But we are not a typical modern-day farm because of our family’s diverse interests. Our 120 acres is small compared to the average farm size of 1,000 acres, but we cram a lot in a little space. Currently, we have corn, soybeans, rye, hay, beef, dairy, turkey, chicken meat & eggs, duck meat & eggs, garden vegetables, horses, dogs, cats growing on our farm as well as a few other enterprises such as feed and fertilizer sales and custom poultry processing services. That means we have about fifteen different enterprises to track and keep separate. We are not historical farmers, as we do use tractors and trucks to farm. But we are not modern farmers either, as we do not have any large fancy equipment. We use older, smaller equipment that was “big” twenty or forty years ago. We place an emphasis on practical sustainability, knowing that we want to farm this land for a long time. We only have hired help for special occasions, such as chicken dressing day or haying time, otherwise, it’s just our family. We’ve learned a lot of how not to farm, but we now have revived the old farming blood and we have found that no matter how hard the year, we cannot help but farm. When the family moved here in 2001, it was with a vision for the children. Even today, it is obvious that Bauman’s Cedar Valley Farms has grown with the children. We are not merely farming for the future, we are farming the future.

CAPTION: Thanksgiving is a busy time for the Baumann’s!