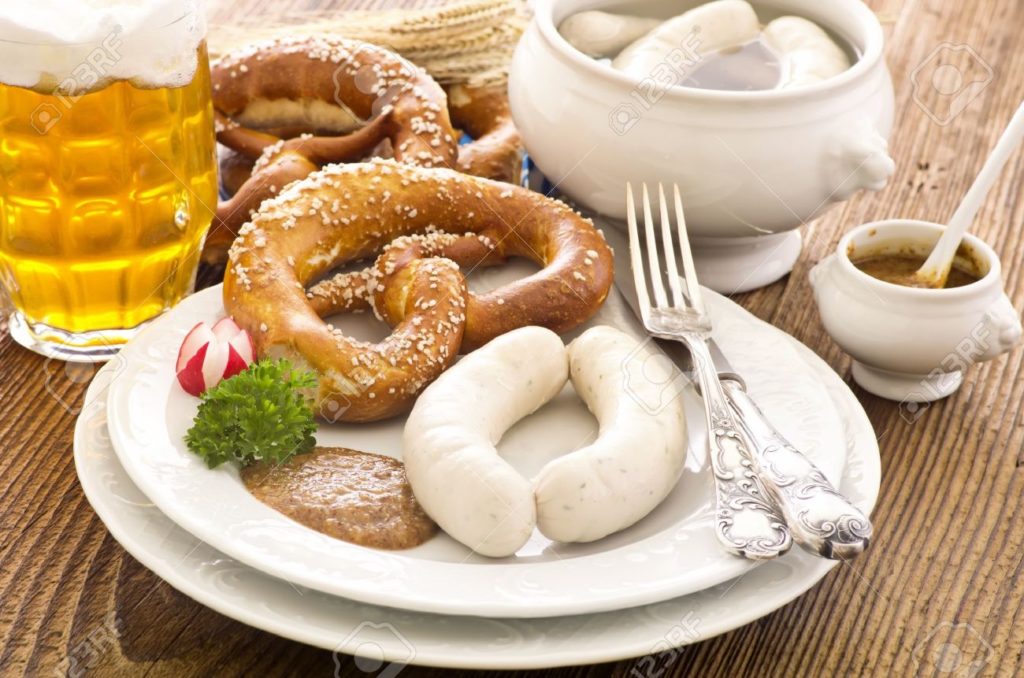 Okay, so I can’t get very far in my trip diary without talking about the German food. The kitchen staff at the House of Bavarian Agriculture fed us well at the workshop: the lunch and dinner buffets featured a soup, at least 5 different kinds of bread, two meats, an organic vegetarian option, a salad, 3 kinds of pickled veggies, a cold cut and cheese platter, fresh fruit and pudding, plus a cake or tart for dessert.

My family heritage is predominately German, but we’ve been in America for 150 to 300 yea rs, so I wasn’t sure how much real German was left in our family recipes. I think we may have more German carryover than we realized. I quickly identified with their starch and protein heavy meals, as the Brethren’s suppers pretty inuch center a round the meat and bread. Interestingly enough, despite the heavy carbs, there were not a lot of obese Germans. In fact, we didn’t really see any obesity until we returned to the States. The Germans are big on fitness. If you don’t do a half-hour of aerobics or running before breakfast you are considered lazy. And laziness is not tolerated by the industrious Germans. I wasn’t about to join in the Zumba class — that just wasn’t my style- but I did do solitary jogging on the forest trail in the morning and sometimes, after da rk, I would run down to the lake. You have a new appreciation for light after you have jogged on trails in the complete dark. But, back to the food…There weren’t a whole lot of fresh vegetables, although pickled ones appeared nearly at every meal. I expected to see the pickled cucumber and beets, but was surprised at the daily appearance of lightly pickled radishes, broccoli and cauliflower. Yes, I ate them, because I am an adventurous eater if it doesn’t cost me any extra. Now I know what to do with my early spring radish glut: pickle them !

Raspberries also made a debut for a meal once a day. I was never very certain if this was because they were in season or if they were the German’s berry of choice. Iwas quite tickled to see my favorite berry so frequently. We even were served a Raspberry Tiramisu! However, the girl from Moldova was unimpressed. “These raspberries are absolutely tasteless! You should taste the raspberries in Moldova! Sooo much sweeter!”

I am an adventurous eater, but I did not try the Pancake Soup. They literally had slivered up thin pancakes into noodle- like strips and put them into a chicken broth with chives. I almost tried it just out of morbid curiosity, to see if it really was as nasty as it looked. The other attendees assured me that it actually wasn’t any good. However, it would be an excellent way to use up leftover pancakes…

For the first time ever, I ate veal. I was quite surprised to be served so much veal. In America, veal is a rarity, a luxury item. But here in Deutschland it is quite common. The most popular sausage in Munich is the weisswurst: a white veal sausage. I can’t imagine having so much veal you can throw it into sausage. Apparently they don’t have the patience to wait the two or three years for the calf to grow. Or else they don’t have the pasture space! Wiener sch nitzel, a classic in Bavaria, tasted mostly like a pork cutlet with just a touch of beef taste.

And, of course, the pretzels! You could find pretzels at every meal, so [ even ate pretzels for breakfast! I definitely did not use the mustard at breakfast! Most of the time I ate the pretzels unadorned, as did most of the locals. However, I did use honey and Nutella for my breakfast pretzels. For dinner one evening we were served soft pretzels so large that we just put our arm through the loop to carry it to the table! This was Bavaria, after all!