In my entire 10 days away from home, I had exactly eight hours that were unscripted. I chose to spend this bit of time with my friend Catherine, who lives 3,000 feet up in the mountains near Sonora, California.

This part of the low Sierras is rich with the Gold Rush mining history. If I had eight hours more, I could have explored some of the old mines in the area, but I’ll have to come back for that adventure. Catherine’s family doesn’t have a mine in their backyard, but sprinkled over their sharply sloping mountainside property are the riches of green growing things and docile livestock. 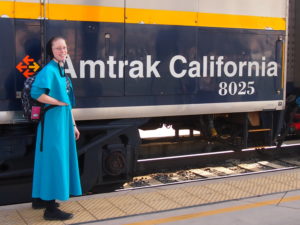 There’s a dormant vegetable garden, a variegated orchard, a greenhouse, a rabbitry, hen-house, turkey shed, and a red barn that shelters goats, sheep, and cows. I helped transplant vegetable seedlings in the greenhouse and assisted with the livestock chores. If the view was nice, the meals were even better. We had shared our colby cheese recipe with this family, so I got to sample their aged raw milk cheeses. I had some absolutely scrumptious dill-onion cheese that improved every dish they used it in.  I also was treated to
fresh beef in a rich bone-broth gravy, served with a soft homemade biscuit. Good beef and biscuits, now that’s comfort food that gets my approval!  (photo source: food.com, Rosanna's pictures were slowed in the mail) 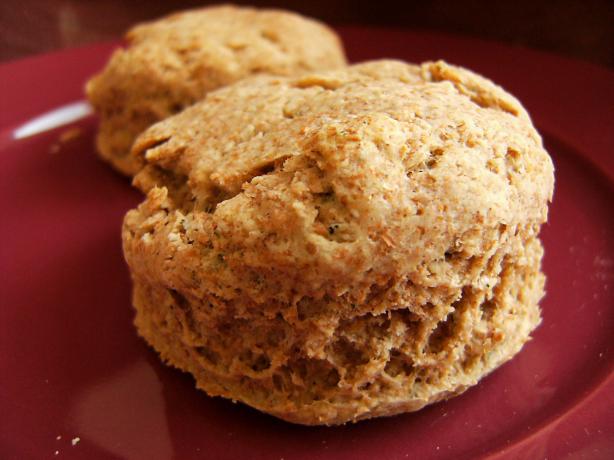 But those biscuits reminded me... “Hey, can I take some of your sourdough starter home with me?” Like the good friend she is, Catherine shared her baking companion with me and I departed from their little mountain homestead carefully guarding a glass jar. I peeked in the jar and was greeted by a couple of joyful bubbles rising from the tan substance. I figured that this little bubbly bread baby needed a name, if we were going to be companions for a while, There was no question about what gender of name I should use, as fermented starters are also called “mothers”. Her “fore-mother” had sallied forth into the West when it was wild, leaving behind many “cultured” Eastern relations, I am sure. She’d wandered from house to house, up in the mountains,
down by the sea, in the hundred and fifty years since their arrival in California. And now, this little bit
was going to sally back to the Midwest on the train with me. It occurred to me that this bread baby must
certainly be a “Sally”. And so she is.

The starter that Catherine gave me has quite the family history. This reilient  "mother” first arrived in California after surviving an overland trek in the Gold Rush days. Now, like most family histories, it’s a bit hard to separate fact from fiction, and Sally was pretty silent on the matter. I thought I could squeeze some family history cut of her, but the only response I got was a burp. Judging from that reply, I'm pretty sure she has some background in the mining camps. But regardless of Sally’s family secrets, we struck up an immediate friendship. She came highly recommended by my friend Catherine, after all. In fact, after making Sally’s acquaintance, Catherine dumped her regular starter because Sally just had better taste.’

I tucked Sally into an ice chest alongside our sandwich fixings for the train trip home. I made sure I put a warning label that read “Do not Toss!” on her just in case someone confused her with spoiled food. She held up well on the long ride home, but then, she has already got that overland traveler’s constitution. I don’t consider myself a hermit, but it Is a bit amusing that my sourdough starter has done more traveling than I have.

Upon arriving home, I gave Sally her first taste of Kansas: a little water and flour. Some sourdoughs can be a bit picky about their diet, so I was careful to feed Sally flour similar to her California diet. To my
relief, she gobbled it up! A sourdough taste can also vary by what it has been eating, so I didn’t want to feed Sally anything that would alter her flavor. Catherine had told me that she had the best flavor of any sourdough she’d tasted. I ave Sally a week to adjust to the 2,000 feet drop in elevation, and then I put
her to work!

We were in the middle of another cold snap and had cooked up a pot of clam chowder. What better thing to serve with clam chowder than sourdough, like they do in San Francisco? There wasn’t time to do a loaf of bread, so we made biscuits instead. This was appropriate since I am something of a biscuit connoisseur. I am loyal to my baking powder biscuits, since past experiences with the yeast versions left me flat. But these Little Sally-inspired biscuits gave those baking powder biscuits some competition. They raised every bit as high as they baking powder version, and were just as tender. They had a pleasant yeasty taste, yet not sour or sharp. Sourdough biscuits are a nice hybrid between a dinner roll and a biscuit. However, we discovered that they weren’t ideal for sausage gravy biscuits- they don’t crumble.

Preheat oven to 435. Mix together in a glass or plastic bowl:

In a large measuring cup, stir together with a wooden spoon:.

Stir the wet mixture gentlyinto the dry ingredients until lust moistened. Let the dough rest in the bowl for 10 minutes. Turn dough ontà floured surface and knead a couple of times, then roll out to W’ and cut out Place on greased baking pan or sheet and let rest for 15 mInutes Bake at 425 for  15 minutes (option: place metal cake pan on bottom rack and pour ¾ cup water in it to steam when the biscuits are placed in the oven) Sometimes I do this, sometimes I don’t bother, but it does give the biscuits a bit more “sourdough” look.