What do you get when you put farmers and foodies into one room? Outstanding, mouthwatering food, of course! The months of February and March are conference season for farmers, so I am often found in a room full of farmers, which is pretty exciting as they are always a positive and innovative sort to be rubbing elbows with. But the food is definitely the icing on the cake. The Slow Money gatherings have potlucks with an abundance of local foods that is always inspiring. But my most recent gathering favorite was the annual Farmers and Friends meeting that is hosted by Cultivate KC. They had a brunch “pie potluck” to kick off their meeting. I totally zoned out all the other attendees when I spied those two enormous tables lined with pie! There were so many delicious looking pies that I didn’t know where to start: quiches made with eggs from the farmer’s own flock; and pies across the whole spectrum: apple, blueberry, pumpkin, triple berry, strawberry-rhubarb, cranberry-pear, squash, and even Canadian wildberry. Most unique was the Honey, Apple and Thyme pie. you didn’t have to guess what you were eating, as every pie-bearer had provided identification for their pie, and many had recipes for the dish sifting right beside it! The Apple Honey & Thyme pie actually was good, but I didn’t ask for the recipe because the baker owned her own pie shop, and I was pretty sure she didn’t divulge trade secrets!

My friend Katherine is the director of Cultivate KC and has been the point person for changing the scene of urban agriculture and refugee farming in the Kansas City metro areas. I, of course, immediately raised my already high opinion of Katherine upon seeing the pie-potluck theme. Katherine took the time to share her inspiration for the pie-potluck with me: Growing up in a rural area, she worked for a local farmer as a young teenager. This farmer was in the habit of taking a mid-morning break at the neighborhood café, and brought his young helpers along. The farmer would sit around and compare notes on farming over cups of coffee and pie. The kids would have their pie with soda pop. The impression was made in young Katherine’s mind that farmers talk the business of farming best over pie and coffee. 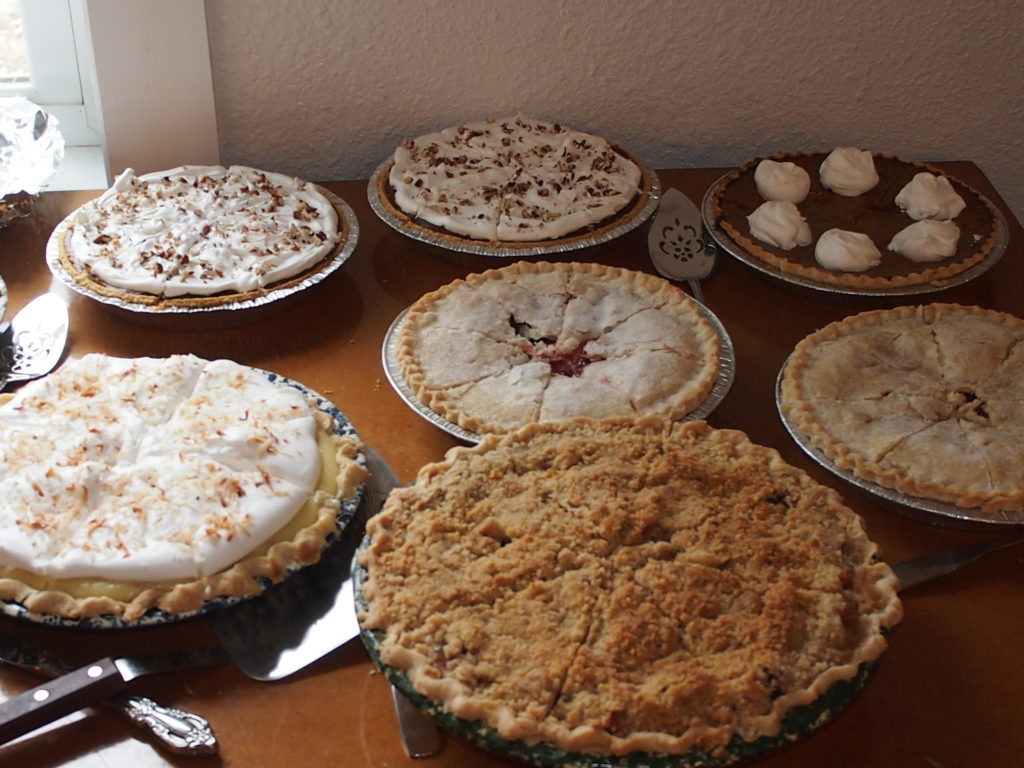 Blueberry Sour Cream Pie is a favorite winter pie in the Bauman household! 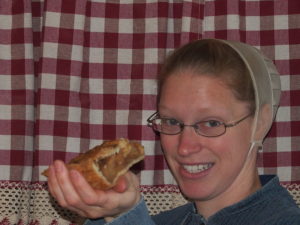 And it’s true! We had a family farm meeting the other week to discuss recent events over a meal, which is differentiated from our other family meals by having an actual agenda and structured dinner table conversation. We served —what else! Pie! We had coconut cream, peanut butter, and blueberry sour cream pies. The graham-cracker crusted peanut butter pie got all of one slice eaten, while the other pies vanished. That was several weeks ago, and that poor ol’ peanut butter pie is still sitting in the fridge. No one will eat it because it’s just too sweet and that graham cracker pie crust just  doesn't compare to our "real" pie crust!  My brother Marvin ate half of the blueberry sour-cream pie before the rest of the family noticed. That is unquestionably his favorite pie and dessert. It is a challenge to have local blueberries in Kansas, because they like acidic soil, and ours tends to be alkaline. My uncle and aunt did a pretty good job with a u-pick blueberry patch for many years, but the dust from the limestone  graveled roads proved to be too much for the plants, so they aren’t heavy producers. Blueberry pies are a great winter pie,because those frozen blueberries you picked in the heat of summer; still taste like summer. And anytime farmers gather in the winter, they really want a taste of summer!  Be sure to use the following recipe with Rosanna's best-ever pie crust, here is the link to that recipe!
« Weekly Blogroll: Amish Honey Raisin Pie; Homemade Pancake Syrup, Amish Home Renovations, and more Irish Amish
Friday Amish in the News: An Amish Wedding Feast and "Secret Lives" of Pinecraft »