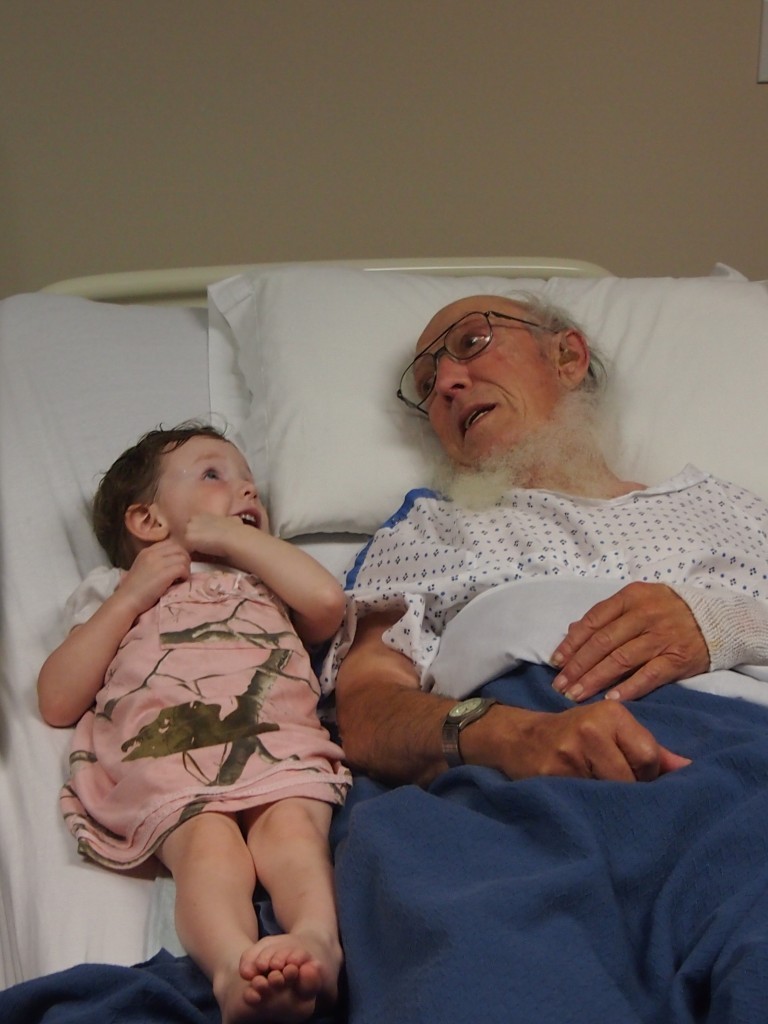 Ava, age 2 in this photo resting with her grandpa Bauman, is now 4 years old and has a new sister! Welcome, Arabella Kate!

After months of anxious waiting, the Bauman family welcomed Marvin and Audrey’s third child. “Arabella Kate.” We are thankful for this newest miracle in our lives and humbled that God entrusts us with the care of another soul. At 7lbs, 13 oz, Arabella outweighs her two sisters. After years of being outnumbered 3:5, the Bauman ladies finally gained the majority. Arabella provides us with a 8:5 female/male ratio. We know that women are a very vital part of farm operations, so we see the birth of girls as a bright spot for the future of our family farm.

Ava and Harper (as well as Mommy and Daddy) are quite thrilled with their new family member. Ava is a very willing diaper-fetcher and Harper is very fascinated with the red fuzz on Baby’s head. Harper is constantly rubbing Arabella‘s head. Adding a third girl to the already intriguing Ava-and-Harper combo will be very interesting.

Ava has always been a very controlled and calculating child. She may do something that looks dangerous, such as climbing to the top of the ladder to get to the barn roof, but you can be assured that she has first calculated the risks and tested the sturdiness of the ladder. She turns flips on the chains in the grain wagons and balances on top of wagon tongues. She also lines her toys up in a row to play with them, as well as neatly organizing the food on her plate. I have high hopes for her natural tendency towards logic and order, as our family doesn’t have a math whiz who likes accounting. Yet… Her precision even carries over into her speech. Ava never spoke in a baby voice, but always had clear and perfect pronunciation. Furthermore, she never misapplied a new word as all toddlers do. When Ava uses a big word for the first time, it is always in the correct context.

We were in the grocery the other day and Ava spotted the display above the bread section. “Look, wheat!“ Sure enough, wheat sprigs were painted on the wall. Ava can identify wheat, corn and soybeans as a seed, as a green growing crop, and as a mature grain. How many four year olds know that? We apparently take her knowledge for granted, as her cousin  Laban, who  is Ava’s age shocked  us when  he called  soybeans  “corn.”  Laban was  extremely  excited  to  be riding in a combine with my brother  lvin but he couId not name the grain they  were  harvesting, much to Ivin’s surprise.

Harper, however, is nearly Ava’s exact opposite. Her energy level has earned the nickname “Hyper Harper”. You can tell she’s a second child as she has a severe case of FOMO: Fear Of Missing Out. In addition, Harper is reckless, bulldozing into whatever looks fun because she doesn’t want to miss out. She instantly copies Ava‘s every move. When Ava slides down the fire pole at a playground, Harper also attempts it, forgetting that her legs are much shorter and can’t span the gap like Ava’s. Then, stretched out in mid-air, Harper discovers she’s in a pickle and starts a distress call. While Ava is quite reserved with her words, Harper jabbers constantly. However, for all that Harper practices saying her words, her enunciation is much less clear than Ava’ s was. (And Ava rarely said anything! ) One thing she doesn’t do is copy her sister’s appetite. Harper eats double of what her finicky sister eats, but that may merely be because she is trying to catch up  to her. Given another year, she will. While Harper is never without a baby doll. Ava is much more into animals. Oddly enough, it is the precise Ava who is her adventurous little farmer and the hyper Harper who plays dollies. For all their differences, though, the girls are definitely best friends as they balance each other out quite well.

With the arrival of their baby sister, Ava and Harper must share a room. In anticipation of Baby’s arrival, this merger had been attempted, but with no success. A dramatic four-yea r old and an energetic two year old in one bed… well, you can imagine the results! But it had to be tried again, as Arabella could  not sleep on the sunporch in her  bassinette all winter. It went like this: “I can’t sleep,” Ava sighs in a martyr’s voice, her eyes wide in distress. ‘”I can hear Harper breathing!” You can tell she’s a farm girl ! We all value our breathing room out here. We need room to breathe, not another person‘s breath (no matter how minty!) but the scent of the soil, animals, and green growing  things.

Farmer’s don’t Iike to feel boxed in by four walls, but rather feel the need to see both horizons. We need room to run,and room to stumble. We are farmers, and we protect our breathing room! But the little girls still need to share a room!