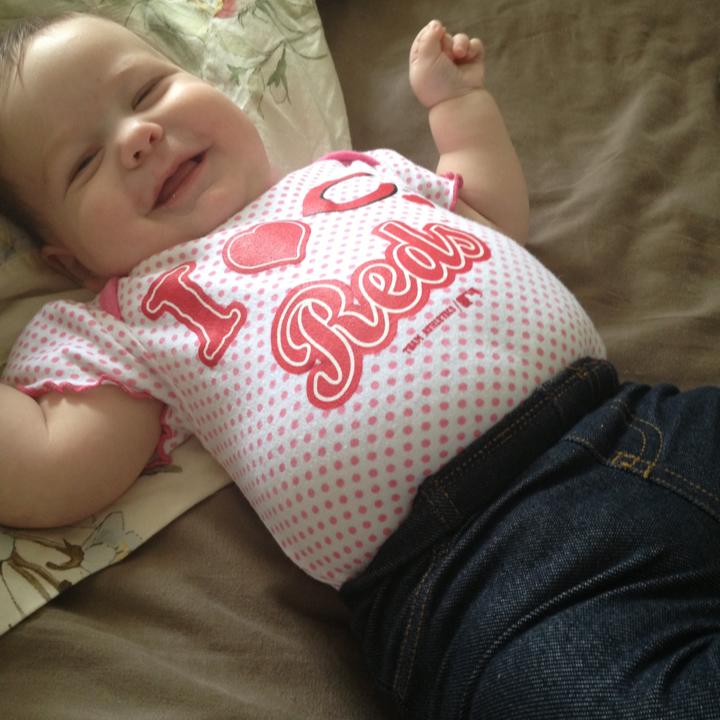 It's only one day and on this day everyone is in first place.  Everyone's dreams are possible.   Perhaps it's like this in other cities. But in Cincinnati, today is Opening Day, when our beloved Reds take to the field and begin a 162-game slog to September.

And if we play really well, hopefully October.  I know football is where America's passion lies.  Men and women alike passionately cheer on their favorite pad-clad college kids or hometown professional team.  Baseball is a poet's game, a slow-speed artistic arc.

In football, there is no chance at redemption.  The schedule is too short, a measly 16 games.   I'd love to be paid millions to work 16 days a year. But baseball?

It's a grind, a sometimes torturous march from start to finish, but any team can over a bad start, a June swoon, or a September meltdown.

Other Amish and baseball links:

Diamonds in the Rough:  Click here to read about a baseball game I stumbled up in Amish country.

UTNE Reader:  If you have time to get through, this is an AWESOME article that appeared in the venerable Utne Reader a couple of years ago all about the Amish and baseball.  It is an AMAZING article and I highly recommend it, click here!

In light of today's special day,  I'll re-run something I posted on my personal blog a couple of years ago:

THE MAGIC OF BASEBALL

A turning point in my metamorphosis  from uncoordinated, geeky teenager to somewhat athletic adult occurred one summer’s evening in my backyard.  A group of neighborhood boys would gather most warm evenings in a large open patch of lawn that straddled my yard and my neighbor Sandeep’s yard. Sandeep was my age and a better ballplayer.  Sandeep’s sprawling maple was third base, second base was an imaginary spot on the border of our yards, while first base was a scraggly pine in our back lawn.  Homeplate was a patch of grass that we had worn bare, much to my Dad’s chagrin.  We had makeshift bases and way, way beyond Sandeep’s garden was a chainlink fence that served as the distant homerun marker.

FIELD OF DREAMS:  It’s been 25 years since the last pitches were thrown and the “home plate” grass has long filled in, but the memories remain of backyard baseball.

Up until that moment, my Little League days were laughable.  My bat would whiff through the air like a blowtorch through butter.  I’m not sure my bat ever so much as touched the ball during my three sorry seasons as a Little Leaguer.  And my fielding was even worse. I would meander around right field hoping a ball wouldn’t be hit my way and often running the opposite direction if it was. When I was older, I didn't play little league, but I did play backyard baseball.  Of course no one wanted ol "Whiff Williams" on their team. But something happened one June twilight when time crept, cares were minimal, and my whole life lay ahead.   Our team was down by a run and I was at bat.  My more athletically inclined cousin, Andy, was pitching for the opposite team.  He laughed as he saw me approach the plate.  I bear no ill-will. I would have laughed too if I were him.  I quickly fanned on the first two pitches like church ladies with their bulletins during a hot summer service.  One more pitch, the game would be over and they’d all go home.  Purple sunset shadows were settling over the field as my cousin let go of what we all thought was the final pitch.  And for a split second the ball hung over the plate.   I took a beastly swipe, a swipe at all the previous missed balls, a swipe at all the times I had been skipped over and saved for last when sports teams were chosen at school.   As the ball seemed to hang over the plate for that sliver of a second, there was a loud, deafening thunderclap crack when my Louisville slugger made contact with the ball.  My cousin spun around and looked skyward.  The rest of the boys froze in place and blinked into the setting sun.  And I watched. And soon we all watched as the ball arced in the air, racing  in a graceful speedy crescendo, clearing the distant chain-link fence, catapulting over a rooftop, before finally finding stillness on a front lawn in the next block.

“That thing had rockets on it!” Andy exclaimed, thunder-struck by what had just occurred.

And that’s the beauty of baseball.  Anyone with a bat and some determination can make magic.  On that night I did.  While I never would be mistaken for an award-winning athlete, that evening was, in retrospect, a teenage turning point.  I’d soon discover weight-lifting , running, and bicycling, all solo sports that I’m pretty good at and still enjoy today.  I gained a sense of can-do confidence that anything was possible if you just swing hard enough and hit the right spot.  I still believe that.

That’s why I’ll be watching today as my beloved Reds take on the Cardinals today on Opening Day in Cincinnati.