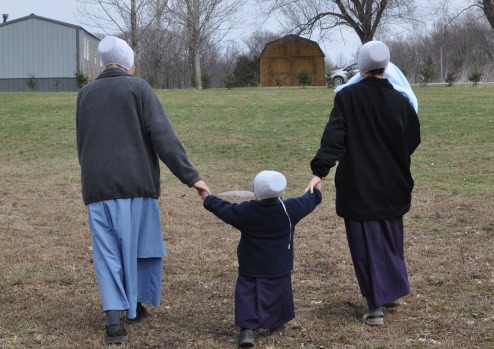 Sheesh, I am still not done posting about my visit with the Old Order German Baptist Brethren from a couple of weeks ago, but now I'll have a fresh round of images, recipes, and stories to share with you from my visit to Gloria and Daniel's yesterday in Flat Rock, Illinois.  I also was able to swing by Daviess County, Indiana, so I'll have some stuff to share from there too in the days ahead!

A few highlights of my visit:

1) Today is Gloria and Daniel's 5 year wedding anniversary.  And they really are a young, in-love couple.  They work together well as a team, finish one another's sentences, laugh at each other's jokes, and are affectionate with gentle touches and "I love yous."   Just a model marriage for anyone to emulate.

2)  Flat Rock truly is in the middle of nowhere.  Really.  The closest town of any size is a place called Robinson, home to a Hershey chocolate factory, a prison and a college. But that's over 20 minutes away and Robinson is hardly a sprawling metropolis. For that you'd have to go two hours to your south to Evansville.   Sprint - my cell phone provider - has atrocious coverage in that area. It's horrible.  There's like a giant Sprint deadzone from Marshall, Illinois clear over to Bloomington, Indiana. Ridiculous.

3)  Flat Rock is a New Order Amish settlement.  They use horse and buggies and gas lights.  The community is more evangelical and mission-minded than other Amish settlements and that is the biggest distinction between New Order and Old Order.  New Order does not necessarily mean more progressive with technology. For instance, some Old Order settlements allow cell phones, I know some Old Order Amish who are attached to texting and cell phones like the phone is an appendage. Cell phones are not permitted in Flat Rock and each and every potential new technology is carefully discussed and considered by the church before adoption.

Yesterday, I got to spend time with Daniel, Gloria, 3-year-old Julia, and I saw 5-month old Baby Austin for the first time. What a cutie!   I sampled some of Gloria's amazing and creative Amish cooking and visited the school-house while it was in session. I 'll be sharing bits from all of these fun experiences in the days ahead!