Every night at 6:30 p.m. my parents are there just as they have been for 40 plus years, since before I was born.  Where?  Okay, every night might be a stretch. But most nights.  Again, where?  In front of the TV, watching the nightly network news.   And every morning their day starts with not one, but two, newspapers.   And those were viewing and reading habits passed on to me, at least for awhile.  As a high school kid, my day began reading those same newspapers and watching the same nightly news. 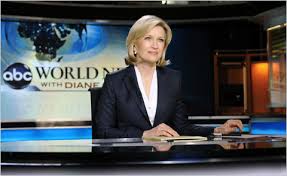 ast forward to today and my morning begins by glancing at my smartphone or my computer to see the headlines. I go to CNN.com, Nytimes.com, politico.com, abcnews.com, and maybe weather.com   In about as much time as it would take to read the paper, I get my news from across the spectrum online at my fingertips.  I did buy a newspaper this morning.  I’m not sure why, perhaps it was just a whiff of nostalgia.  I doubt my 8-month old daughter will ever see newspapers as a deeply ingrained part of her life like I once did.  And I do think that is sad.  Newspaper stories were a unifying force, a common thread we all shared and could talk about around the water cooler.  Today’s media is so fragmented and diverse that few of us read the same sources for our news.

I used to watch the nightly news also but unless I just happen to be in front of the TV at that time, what’s the point?  I already have my fill of news at my fingertips all day long, I don’t need Diane Sawyer telling me what she thinks is news.

CAPTION:  A community profile written in the summer of 1990 of the tiny settlement of West Elkton, Ohio about 12 miles west of Middletown.  I spent several days there with a photographer for a "Sunday package" story about "small town" life.  The story began with a profile of "Ma & Pa's" a local restaurant/general store.  It was run by a man named George who kept a handgun behind the counter and made biscuits from scratch every morning.  A group of regulars came in every morning for coffee, biscuits, and gossip.  A couple of customers even had their own key to the store if George was running a little late.  Those were the types of stories I loved to capture and the ones newspapers largely don't devote the resources to anymore. 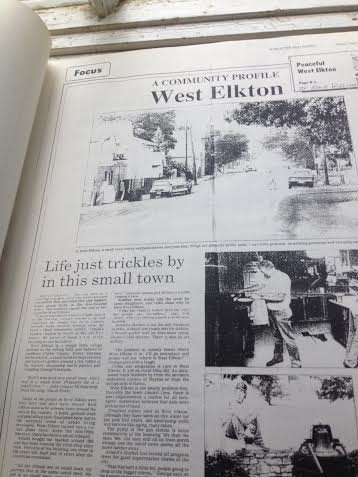 I do miss newspapers. Unlike network TV newscasts ,which were always sort of sterile, the local newspaper was a reflection of the local community with all its color, characters,and coverage.  I used to be a reporter for my local newspaper some 20 years ago.  I’d scratch out stories from the people and places in my own backyard.  I spent nights on the job with third-shift workers writing about those who worked while others slept.  I covered county fairs and sleepy small towns.  I nurtured my interest in Plain communities by spending time with the German Baptist Brethen and writing about them.  I was given free rein to go out and cover the community and dig for interesting, fun stories which I filled the Sunday paper with during the summer of 1990.  I’d never be given such latitude today.  Space would be too tight, the budget couldn’t justify having me spend the day at the county fair.

And I remember when many cities still hung on to not one but TWO papers.  Little Muncie Indiana had the morning Star and the evening Press.  Dayton,Ohio had the Journal Herald and the Daily News.  Cincinnati had The Post and the Enquirer.  Cities like Tulsa, Detroit, Indianapolis, and Kansas City had two dailynewspapers duking it out.  Today, only tiny Fort Wayne, Indiana hangs on with two daily papers in the same city.  I still marvel at how they are able to keep two papers going.  I used to have newsprint in the blood, dreaming of one day owning my own newspaper, or maybe even starting one from scratch.

Business Insider posted a story recently that seems to sound the death knell for newspapers largely because of the generational shift of readers like me towards electronic media.

So, where do you get your news?  Do you still subscribe to a daily paper?  Watch the nightly news?