Next week will feature a bunch of posts about my recent visit to Berne and Geneva, Indiana's sprawling Amish settlement. I've spent a lot of time in that community over the years and have made a lot of friends, but it was the first time I had been back in awhile.  The settlement always stirs emotions within me that are deep and sometimes raw because I've been visiting there for so long.  The Amish here have different customs, dialect and demeanor than what you might find in other settlements. 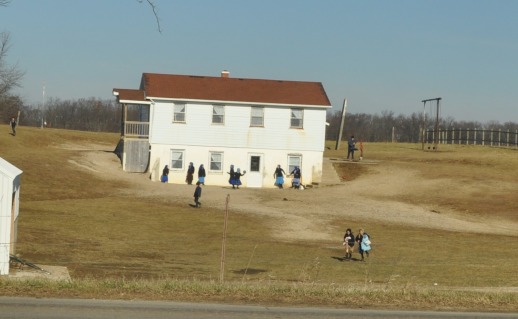 Amish children play outside at recess on a crisp December day.

Next week we'll explore some of those customs and some of my favorite stops in Berne.  For today, though, let's just enjoy these serene Amish school scenes and a recipe that an Amish cook in Berne gave me yesterday.

By the way, the vast majority of Amish in the Berne, Indiana community used to attend public schools.  But that has been gradually changing as more and more Amish schools have sprung up over the past 10 years or so.  In combination of the intrusion of technology into the public school classroom and the scrubbing of religion have prompted many Amish to put their children into the parochial schools.  This trend mirrors what has happened in other large Amish settlements across the USA.  Ever since the landmark Supreme Court case of Yoder vs. Wisconsin in 1972, the trend toward Amish parochial schools has been accelerating.

There's some very carefree about watching these children play outside at recess.  Our world is under constant siege from technological intrusions and just general craziness and here you have a group of kids who play happily outside, no electronic inferences, just wholesome fun.   Somehow they manage to do what the rest of us have trouble with and that's controlling technology and not the other way around.