About Rosanna:  Rosanna and her family are German Baptists, living an agrarian life in Kansas. German Baptists are Plain people that share similarities with the Amish, but they embrace more technology and modern means. This column is the 5th of an 8 week trial period.  This column in no way replaces or supplants The Amish Cook, rather it helps expand this website’s audience, which helps everyone.

When I get on the subject of biscuits with a captive audience, I may not stop for a while. I’m not real sure why I have this fascination with biscuits. Perhaps it is because I like to root for the under-appreciated things, and the “lowly biscuit” doesn’t receive much acclaim.  But I suspect the reason I have adopted the biscuit as my culinary trademark is for a much less noble reason than it being under-appreciated. Biscuits were one of the first recipes that I practiced and perfected as a budding cook.  Baking biscuits wasn’t something I was taught, or I recipe I was given. A love of biscuits was something I discovered by myself: I spotted a recipe for Sky High Biscuits in a Taste of Home magazine and decided that recipe looked more promising than the one I was currently using with only moderate success. Before hand, biscuits were on the same enthusiasm level as cornbread at our house: a starch we prepared every now and then, and ate with a sense of duty.

But this Sky High Biscuit recipe changed how biscuits were perceived at our house. In all actuality, it isn’t that special of a recipe, I have since seen other biscuit recipes similar. But I believed that this recipe was special and would produce delicious biscuits. If the biscuits didn’t turn-out much differently the first couple of tries, I blamed it on my skill and not the recipe. The recipe gave me the incentive to practice and perfect my biscuit making skills,which enhanced the biscuits as much as the actual recipe. I rarely look at my recipe any more, though. I long ago memorized it because I used it so much. It’s one of the four recipes that I have totally memorized.

We like biscuits for supper because it’s a quick bread we can mix up without the foresight that yeast breads require. It’s just a baking-powder biscuit, but I’ve been so content with it that I haven’t branched out much into yeast or sourdough biscuits.  So here’s my recipe for Sky High Biscuits: 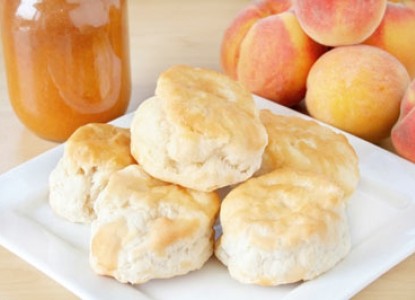 Caption: These are not Rosanna’s Sky High biscuits, but they are a stock photo of the same recipe, so hers would look similar.

ROSANNA’ SKY HIGH BISCUITS Do not forget to preheat the oven to 450 degrees, because it’s important the biscuits go directly into the hot oven. Blend 3 cups of flour (one cup of whole wheat may be used] with one half teaspoon of salt, 3/4 teaspoon cream of tartar, 2 tablespoons sugar,(I don’t always include the sugar and sometimes I just put in one tablespoon) and 4 teaspoons baking powder. Cut in 3/4 cup of butter. Lightly beat 1 egg in 1 cup of milk before stirring it in the flour mixture. Work quickly, you may have a bit of flour in the bottom of the bowl when you turn it out onto the floured counter-top, but it will work in. Knead only a couple of times to get the rest of the flour worked in. Don’t ever-knead the dough. This is not a yeast bread. You’ll want the dough floury on the outside and sticky on the inside. Roll to half an inch thickness, place on greased baking-sheet (we use air-bake sheets) and bake for 10 minutes or until they reach desired brownness. I rarely use a timer; I just pull them out when I like their looks. I usually get about 18-20 biscuits out of this dough. These biscuits are flaky in the outside and moist in the inside.

I picked up a few biscuit-making tips this winter from (of all things!) a man’s 1912 memoirs: Ralph Moody’s biographical book The Fields of Home. He had to learn how to make biscuits at the age of fourteen when he was spending the summer with his widowed grandfather. The neighbor girl told him to make sure the flour was sifted and had plenty of_air. She also basted the tops of the biscuits with cream just before baking and pricked them with a fork. I have done some basting-and it does make the biscuit tops prettier, a bit glossy with brown edges, and none of the floury look. I can’t bring myself to poke the biscuits with a fork, although I’ve seen some cooks who do. I think fork pricks ruin the biscuit’s pretty appearance   I don’t know what advantage the pricking may have.

Most interesting, I read that Ralph was taught to get these biscuits into a hot in less than two minutes after the milk had hit the baking soda. Since reading this, I have tried to make that goal, but so far I’ve fallen short. My time usually runs more to three and half to four minutes. I do think that the biscuits rise a bit better when I’ve hustled than when I’ve just taken my time.

When served at the supper table, we eat the biscuits with just butter. I personally think that good bread and biscuits don’t need anything more than butter. Jams and honey distract from the biscuit taste. If the bread is good enough, you won’t want to cover up the taste with jam! My Uncle Dan has a lot of beehives, and when my aunt gives samples of the honey, she always puts the honey on miniature biscuits. I do approve of her sampling methods! I even like biscuits “cold’“. We eat about fifteen biscuits at a meal, so we usually have three to five biscuits leftover.  I’ll eat these biscuits for a snack as I’m going about the day. Sometimes I’ll split the biscuit and put some of my uncle’s honey in between, and eat it as a biscuit-honey sandwich. Just as often I’ll nibble that room-temperature biscuit plain. If the biscuit is a couple of days old, I’ll warm it up, otherwise I don’t bother. One of our favorite  breakfasts is biscuits and gravy, although it has more to do with Mom’s excellent sausage gravy than the biscuits. It is Joann’s s favorite breakfast, and the one sure way to get her up in the morning is to tell her that biscuits and gravy is on the menu!

I think that the reason I’ve become such a biscuit fan is because they are mine. They were the first thing that I could actually bake better than my mother. Since the biscuit is such a simple food, mine were also better than what most other folks bothered to make. No on else was much interested in improving their biscuit-making skills, therefore I was. Biscuits, for me, represent the beginning of my self-confidence in the kitchen. By the way, my mother now can bake the biscuits as well as I can; she just doesn’t employ as much care as I do, so mine occasionally still come out better.