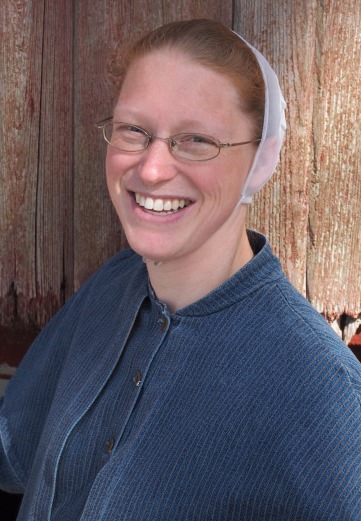 Rosanna Bauman is German Baptist Brethren, a Plain church that shares some similarities with the Amish.

I may be a pie snob. Pie is one of my favorite food groups, I mean desserts, or whatever category it is that you measure food dishes by,  pie ranks up near the top. First and foremost I judge a good pie by its crust- I know a lot of folks who think they like pie, but they don’t eat the crust! The crust is just as much of a part of the pie as the filling. “Pies in a jar” were a trendy little dessert item last year, and seem to still be hanging on. While they are cute, I have steadfastly refused to make this dessert, because the “pies” only have a top crust, no bottom crust. They are mock pies, like the false-front buildings in the Old West, pretending to be bigger than they truly are.

Since I’m such an astute crust fan, I am able to identify the pies made by several of my fellow church members by their pie crusts. I also can identify pies that came from the freezer section, or crusts that were bought frozen.

“This is a pretty decent apple pie,” I agreed at a recent potluck, “but it isn’t homemade, it’s Mrs. Smiths frozen.” Some of my seat-mates questioned my accuracy, but I stuck to my statement. Mrs. Smith brand has a pretty good pie, and a very distinctive crust.

Although I still prefer my grandma’s pie crust recipe over any other I’ve eaten, I do compliment other bakers when I  eat a slice of pie that has a decent crust. Sometimes, though, I should keep my mouth shut:

“Hey, your pie is good,” It old one of my friends, “I especially liked your crust!” “Thanks,” She replied “It was your recipe!”

PHOTOS BELOW:  Rosanna makes her favorite crust, step by step.

After all this chatter about my grandma’s crust recipe, I guess I’d better share it.   Before I get to it, though, I will say that for my shortening I prefer half a cup of butter mixed with 1 /2 cup of lard, but I have used all butter if I am out of lard. Also, chilling the dough can be skipped if you are in a hurry, I’ve skipped that step before and there’s not a huge difference in how it turns out. Here is the recioe, as I have it stored in my memory:

While I am a crust fan, I also have very particular rules for what constitutes a great filling. I argue that a pie that is “floofity” is not theoretically a true pie. in case you are not aware of what a floofity pie is, I will gladly enlighten you. Any pie with whipped cream in the filling, or meringue on top, may   be a tasty dessert, but should not presume to carry the name of Pie. True pies are most often double-crusted, but not always. The filling can be meat,fruit, or milk based, but if you try to make it “airy” you have a pastry. Now, I realize that a pie may belong in the pastry family, but all pastries are not pies, they are relatives:

The other weekend, our local church district hosted our annual Lovefeast. Our Lovefeast consists of two whole days of church services that include a communion service. Since this only occurs once a year, we usually have a lot of visiting church members, with many families coming.from other states. Because there is nearly eleven total hours of preaching services over two days, we provide meals for everyone at the church. There are four meals served in our church basement over the weekend; two of them are for lunch. The menu is simple and.does not change from year to year. In addition to the meat, bread and soup, we serve peaches for breakfast and for lunch? Pie. This means, of course that all the local Sisters contribute pies for the meals. Our household typically brings six to eight pies. This year,we had more milk than we knew what to do with, so we gleefully used up milk by making all cream pies.

Mom and I made a blueberry cream, three coconut cream (her favorite) and four custard pies.

The pies most definitely get eaten. There are a minimum number of 160 pies needed to be able to put pies on all the dining tables for two meals. Quite often there are more than that donated, because we sure don’t want to run out! We also bring plenty so that there are leftovers. All the leftover pies are set out Monday evening when everyone returns to clean the church and put away the dishes.

It is a pie orgy. When I arrived at the meeting house Monday evening, I was greeted by a table spread with sixty-six pies! Hardly any of them were complete, however. Most were one-fourth to one-half eaten. The plates and silverware are all being put away, so only a minimum number of utensils are used. There are a few knives out to cut the pies, and a small number of forks, but no plates. Pieces are either put upon a napkin or eaten out of an empty pie plate. It has been a trend in some upscale restaurants to serve dishes that are eaten without utensils. (And I don’t mean sandwiches!) I can totally understand the appeal of eating with your hands. It is a departure from the typical way you consume food and makes you more aware of the eating experience Eating pie with your hands is definitely one of the best ways to enjoy pie (a good crust will not fall apart when held in your hand) Little children were dashing up to the table, grabbing a slice and running outside. I grabbed a tin and loaded it up before the little people scarfed down all the good kinds and left me the raisin cream and watery Dutch apple. I found some good slices of pumpkin, custard, mixed berry, pecan, apple, peach cream, and blueberry.  That was all. I ate several  small pieces of pie — or was it eight? I seem to recall something about a blackberry cream, but I can’t recall if ate it then, or the day before. Regardless, my consumption that evening alone was about equal to three-fourths of a pie! I washed down all that pie with nearly an equal number of glasses of milk. Is imply had to stop selecting pies to taste. My mouth was still pie-hungry, but my stomach was mounting a pie protest.