I sometimes call US 62 "The Amish Highway."

If you ever are traveling from Columbus to Cleveland, Ohio and want to take a scenic byway instead of the highway, considering traveling US 62.  This road leaves the northeastern extremities of Columbus and snakes through bucolic verdant countryside for its entire path north to the southern suburbs of Cleveland.   The road is almost non-stop in Amish Country from Johnstown in the south to Navarre in the north, a span of some 90 miles that you have to be alert for buggies.  You will also traverse almost every spectrum of Plain people from the most progressive New New Order Amish near Walhonding in the south to the ultra-conservative Amish in the north in Wayne County.  I refer to this whole swath, from Johnstown to Navarrre, as the "Amish Archipelago" in my Williams Guide to Amish Country book. 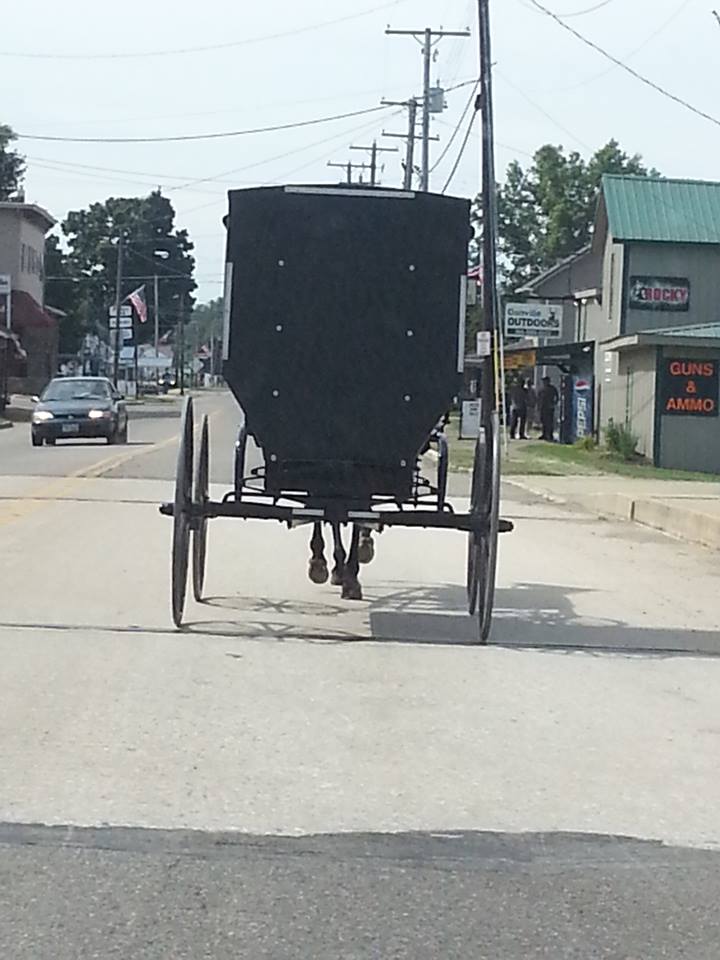 Diann Thomas Brown shared this photo from Danville which sits in Knox County along US 62 not far from the line with Holmes County.  There are always plenty of buggies out and about in the Danville area and Diann spotted this buggy moving along without the customary orange triangle. Swartzentruber Amish?  Doubtful.  There are no Swartzentruber Amish near there (that I am aware of, I do not know where every single settlement is) and even they would at least put grey reflective tape on their buggies, but this has neither tape or a triangle.  There are some gray stripe strips on the buggy in the photo so I suppose this could be a buggy belonging to an ultra-conservative sect.  There are what are known as Andy Weaver Amish in the Danville area, so I would not discount that possibility completely.

" The other buggies we passed in that same town all had the orange triangle on the back and some had the grey reflective tape, as well, so I don't think it was Swartzentruber Amish; it just looked like a young man in a brand new buggy." Diann noted.

I tend to agree with her assessment that it's probably just a brand new buggy out for a spin, on its way home and it'll be outfitted with all the accoutrements later.

An irony of the photo is the prominent "guns and ammo" store visible.  The Amish are generally pacifists when it comes to participating in physical violence (i.e. military, resistance, etc) but there is a great spread of opinion among the Amish when it comes to gun ownership for hunting.  Many Amish are avid hunters and, if I had to guess, that gun and ammo shop has a lot of Amish patrons.