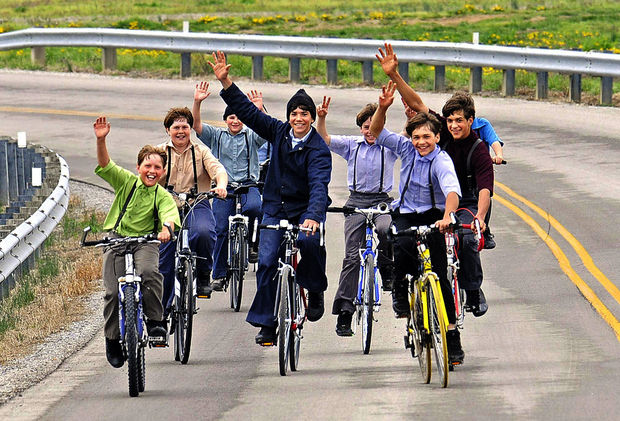 This shot was taken by Terry Prather of the Ledger-Independent in Maysville.  The nearby Amish settlement of Mays Lick is a rather progressive one.  Children here ride bikes (not something permitted in every Amish settlement) and, as you can see, the clothing is a bit brighter.  Generally the Amish are more permissive of children being photographed since they are not church members yet.  This photo obviously was taken with permission.   This seems a little early to be letting out of school for the final time, don't you think?  So I might have to do a bit more digging on that.  But this photo was taken on the final day of school on Tuesday, April 22 near Scenic View Amish School outside of Mays Lick.  Ah to be young, wouldn't you celebrate also if you had months of free time before you?:)  (okay, Amish children as a rule aren't going to be spending their summers on Facebook and at the pool, but, still, it is a carefree time)  And kids are kids, Amish or not, love the "no hands" biking by some of the kids!