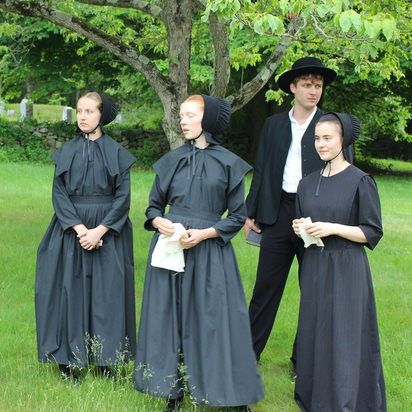 Okay, it's silly season in TV land....or, maybe I should say the folks Hot Snakes Media drank the spiked punch again to deliver us the gem of a program airing this weekend on Lifetime: Amish Witches: The True Story of Holmes County.

You know, I might be more genuinely curious about this show's genesis and premise  if I didn't know that it was produced by Hot Snakes Media, the same production company that brought us Amish Mafia and Breaking Amish.  Of course, Amish Mafia is pure fiction. There is no such thing.  Hot Snakes  are a Hollywood production company cashing in on interest in the Amish.   There's nothing inherently wrong with that.  This is a capitalistic economy and they've found their niche.  Where I DO have a problem, though, is in their marketing of stuff as "true."   There is no true story of widespread witchcraft among the Amish in Holmes County, or anywhere else. Wiccan is its own religion and it shares theological overlap with Anabaptism.   Now, in slight, slight, slight, "defense" of this show's premise, there are more historical instances of witchcraft appearing in Pennsylvania Dutch lore, but, as we have discussed on this site ad nauseum, the Amish and Pennsylvania Dutch are not the same.  Most Amish fall under the umbrella term Pennsylvania Dutch, but not all PA Dutch are Amish by any means.

So, this may be the most entertaining show ever and, if so, great, watch it, enjoy it, just know that there is no "reality" to it.  There is nothing wrong with good fiction.  Fiction is just that fiction, stories about Godzilla, space creatures, gnomes, talking animals, and Amish witches.  Nothing real about it.

...my parents have Amazon Prime and love it...30 days free is a pretty good deal!)

There is one case where a young Amish girl may have been labeled a "witch" near Arthur, Illinois and you can read more about it here, but to me it sounds more like a case of misuse of the word "witch" and was just a case hysteria a la Salem.  You can click here to read my original article about the Chesterfield Witch.  The Inquistr linked to my article and they were about to find a bit more info about the Chesterfield Witch, not much, but a bit more info.   This is a pretty flimsy premise to build a "true story" upon.  So, again, if you choose to watch " Amish Witches: The True Story of Holmes County" on TLC this weekend, know that it is pure fiction.  I've been visiting Amish communities for over a quarter century, including scouring the hills of Holmes County, if witchcraft were present I think I would have heard about it.

« Amazon Wednesday (Plus some singing): Montezuma Community Cookbook, The Bargain, and Life on the Farm
Help This Man Find His Horse...... »