Pork tenderloin is a cut of meat that comes from the back of a hog. It’s juicy and tender, but that isn’t always what I think of when I hear the words "pork tenderloin." In Indiana and Illinois and other parts of the United States Midwest breaded pork tenderloin sandwiches rule the roost, and they are these huge deep-fried pieces of meat that dwarf the bun they are stuffed on. SIGH, and then, to add further confusion there is pork loin and pork tenderloin, here is a good tutorial on the difference.

The marinade for today's Super Juicy Pork Tenderloin is a sweet honey and sugar glaze.

For today’s post, we’re focusing not on the gargantuan sandwich but on the cut of meat from the pork that is formally known as the tenderloin.  This is a great recipe that comes to us from a Mennonite family. Very simple, but makes for a very juicy supper

The pork tenderloin is a prized cut of meat among Amish hog butcherers and homemakers.

The marinade and the meat are a great match in this Super Juicy Pork Tenderloin recipe. The meat comes out fork-tender and delicious, according to my parents who used this recipe.

Among the Amish, ground beef, chicken, pork, those are your main meats…After that, much lower on the totem pole are meats like turkey, fish, venison, and then other hunted game, such as a squirrel, although that isn't particularly common in Amish communities.

Is there a certain time of year that the Amish do their hog butchering?

The job of butchering a hog is labor-intensive, hot, messy work. It's not something you want to do in the middle of July in the United States. Most hog butchering is done in February and March, when it is still cold and there's not a lot of other work going on on the farm.

Pork, brings a whole community together, because butchering a hog is such a big job. The job of hog butchering will often be shared by multiple families, or even the whole church community. Everybody will pitch in, it’s a messy job, but if everyone works together on it they can make quick work of it. And I mean everyone participates, right down to the youngest children. Everyone has a role to play, they take their jobs seriously and it gets done.

So, enjoy this delicious dish for a sweet pork tenderloin supper. Pairs well with a vegetable like corn on the cob or green beans and potatoes. And, of course, I love a slice of buttered bread with anything! 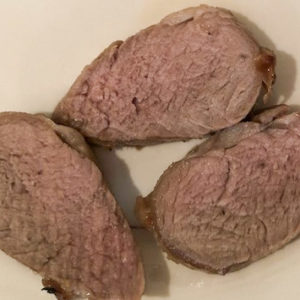 Tried this recipe?Let us know how it was!
« So-Good Pumpkin Mini-Muffins
Amish Hamburger Sandwich Casserole »