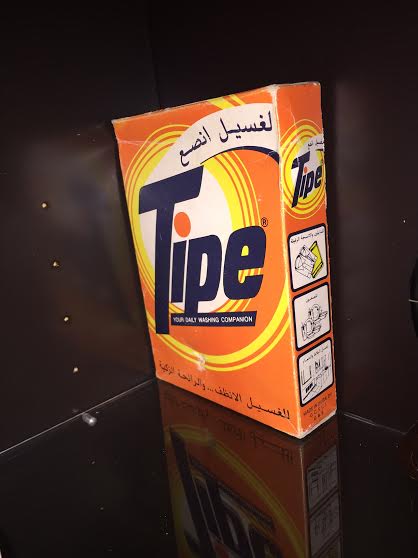 Ah, laundry soap.  Maybe I'll post some Amish formulations for homemade laundry soap this week. Washing one's laundry is one of those universal - and generally reviled - chores.   Not everyone hates doing laundry, my wife likes to do it.   And I think I'd like to do it more if we lived in a place where we could crisply line-dry our laundry.

At first glance, this box looks like a universally recognizable corporate symbol.  This was found and purchased by my Dad in 1978 in a bustling souk (outdoor bazaar) in the dusty border outpost of Al-Ain in the country of the United Arab Emirates.  Regulars on Amish365.com know that I spent a good slice of my childhood living the UAE and in Saudi Arabia.  My Dad worked for the international division of a steel firm in my Ohio hometown and they sent us overseas to live on a couple of occasions.  It was definitely culture shock in many ways, but I learned a lot.  I think cultivating an appreciate of other cultures at such an early age helped sow the seeds for my later appreciation of Amish culture.

Okay, so back to the Tipe.  Apparently, it was cheaper to make fake products domestically rather than import them.  That is why the country - at the time - was full of quirky knock-off products like Tipe, Cacky Cola (instead of Coca) and McDonald (complete with the Golden Arches) instead of McDonald's.   Hmmm, I never was brave enough to try the Cacky Cola. And the Tipe? Well, Dad just thought it was a good souvenir and kept the box where it stays on display at their home all these years later. So I can't give you any reviews of how Tipe is as a detergent!

Actually, since that was almost 40 years ago I doubt Tipe still exists and had Proctor & Gamble's lawyers knew about it at the time, theyprobably would have been on a plane bound for Al-Ain pretty fast.  I'm  guessing you could get the real thing there these days.  No matter, I always preferred Cheer anyway!:)