TALES FROM THE TRAIL: PART II - second of a three-part series. Miss yesterday's installment? Check it out here.

I was cursing the Iphone battery for being such a patsy and myself for even caring. This was a hike, not a tech conference.

So I kept moving, crossing creeks, ascending steep hills, and soaking up the gorgeous June sunshine.   The Amish adopt buggies as their mode of transportation in part because it forces them to slow down, to take in their surroundings, to stay close to home and family.  Traveling on foot forces one to do many of the same things.  Each step is an exercise in deliberation.  Which rock looks the steadiest when crossing a stream?  Should I walk straight through mud, or should I go off the path a pace or two to avoid it?  After encountering the serrated edges of stinging nettles I quickly realized going through the mud was best.  But mostly the hike was an exercise in solitude.  I think a part of me was trying to reconnect with something, although as the paces melted into miles it became apparent to me that I wasn't sure what it was. Serenity? A chance to re-evaluate my life and figure out what I've done wrong and what I've done right?  A chance to stretch the boundaries of my physical capabilities? 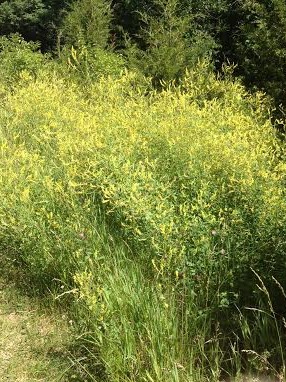 CAPTION:  Beautiful bunches of goldenrod grow and glow along the trail.

An hour into the hike I finally heard chatter on the trail ahead of me.  There were four middle-aged ladies (wait a minute, aren’t I now considered middle-aged at 41? These women seemed 60ish, though).

“Oh, a fellow TVTer”  one of the women chirped.  Organizers gave all participants an orange ribbon to display on their pack or themselves to identify themselves as TVTC participants.  It’s a great idea that leads to conversation and friendly greetings between participants on the trail.

The ladies were all wearing heavy packs as if they were accompanying Sherpas someplace outside of Katmandu. I wondered where they could possibly be going on this trail wearing African safari garb with what looked like a month’s worth of provisions.  This was an hour north of Cincinnati, not the Kalahari Desert. Meanwhile the ladies peered at my lightly-packed, ill-prepared self.   I figured that this was a hike, a hike staffed with water and snack stops.  There was no need to bring anything other than myself, right?  I  made a concession and brought a cold 32 ounce water bottle with me.  I also went to the dollar store on the way to the hike and bought a cheap cooler bag to keep my water bottle, car keys, and wallet in.  It didn’t occur to me until somewhere on the hike that the bag was almost the exact same electric lime green as my sneakers.  I probably looked as if I was making some sort of statement, but other than poor taste, I wasn’t.

“Have fun on your stroll” one of the ladies said.

“Why was everyone referring to my hike as a `stroll’?” I wondered to myself, but replied simply:

“Yep, great!” and continued on leaving them behind to the forest.

The Twin Valley Challenge consists of a a hike through Twin Valley Metropark,  then a 7-mile connector through Germantown, Ohio, before arriving at another Metropark, Germantown Metropark,named after the nearby town of the same name. 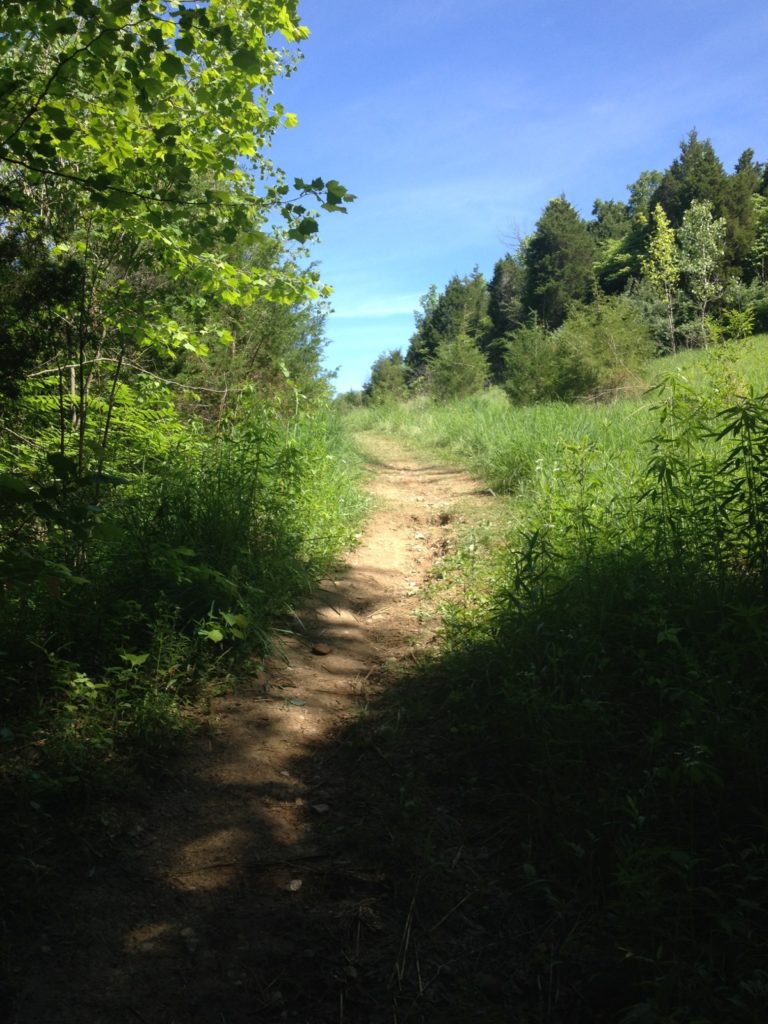 CAPTION: The trail ahead.

There’s something unforgiving about arriving in a town after being enveloped in the comforting cocoon of prairies and woods, being serenaded by songbirds and the sound of soft wind.   The trail wound out of the wilderness and onto a hot asphalt road by a concrete company.  Suddenly the 78 degrees which seemed so pleasant in the forest turned into the blaze of a frying pan on the hot road and a sea of cement mixers.  My feet were beginning what would be a long day of protest.  I avoided passing motorists and tried to tuck my electric green $2 cooler bag under my arm.   The trail wound through town and eventually back into the welcoming arms of the forest on the other side.    Shortly after re-entering the wilderness I met up with a  silver-haired woman going the opposite direction,  bounding across the trail with the ease of a marmot. The “connector” part of the course was the one section of the entire route that was a ‘two way’ street, the rest were one-way, so this is the one part where I actually did encounter other hikers.  She greeted me:

“How far are you going?” eying my orange ribbon.

“Not decided yet,” I said “I’ll see how far my legs take me…how far are you going?” I grunted as trudged up the hill.

“Oh, I’m going to do the 28 miles,” she replied nonchalantly as if she were swatting a moth.    She had to be approaching 60 years old.  The rugged hills and her age were a mild inconvenience for her.

It wasn’t being cardio challenged by the event.  I’ve been a runner for years and in that sense I am in good shape.  It was instead my feet that were beginning to protest my every move.

“Best thing to do is wear hiking boots with wool socks,” one of the volunteers on the trail to me.  “And most of the distance hikers wear some sort of insert to help with whatever is bothering them.”

Lesson learned for next time.

I look down at my  running shoes that could double for an emergency beacon on a dark night.  I hadn’t worn socks.  I don’t like sweaty, uncomfortable socks. I sat down on the trail and took my shoes off thinking I might have better luck going barefoot than wearing these torture devices.  I pushed onward, towards Old Mill, the next “comfort stop” with fresh water and restrooms.   My Iphone battery had now drained down to 20 percent, I'd have just enough to send Rachel one more text from the trail when I reached the next stop.  But I was still two miles away with some of the most rugged terrain of the course between myself and Old Mill. And I was now trudging down the trail barefoot.

« Amish Strawberry Shortcakes
Amish in the News: Why Don't The Amish in Ohio Serve on Fire Companies? »