The idea of disappearing into the wilderness and just being at one with nature has always been vaguely appealing to me.   It shouldn’t be totally surprising that a person who’s job is writing about and chronicling Amish culture has a bit of an isolationist streak.  There’s just something satisfying about self-sufficiency and today’s 21st century world seems to offer fewer and fewer opportunities for it.   And ever since I read Bill Bryson’s wonderfully comic yet poignant memoir, A Walk in the Woods, I’ve  thought it’d be such a neat, life-changing challenge to hike the Appalachian Trail.  But who has the time for that?  One would basically have to put life on hold for six months.

So  several weeks ago when my wife told me about the Twin Valley Trail Challenge, I jumped at the chance.  It’s hardly the Appalachian Trail, but, unlike the fabled AT, this trail is practically in my backyard. I could at least be a hiker for a day.  The TVTC offers a bit of something for everyone.  The longest hike is a 41-mile leviathan.  Those hikers started out at 5 a.m.  The other, more “modest” route was 28 miles, followed by a 20-mile option and numerous other lesser ones.  I wasn’t sure which route I’d select. I figured I’d just start and go until my legs told me “no more.”     These are not pancake flat trails, by the way. The trails of Twin Creek can be rather rugged with steep grades and challenging switchbacks.  It seems, at times, more West Virginia than Ohio.  I had hiked over 6 miles of these trails at a time in the past, but I was always a bit tired after those jaunts.  Still, I figured if I really pushed myself I’d be able to do at least 10 miles today. 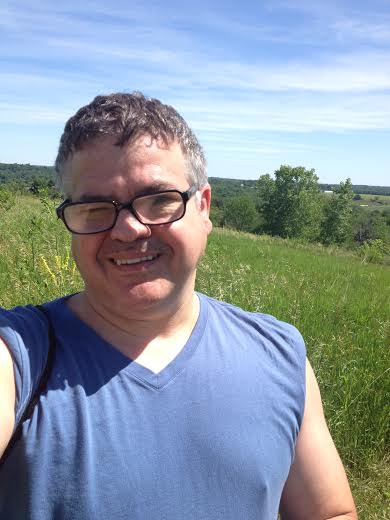 TRAIL SELFIE:  Okay, I vowed I wouldn't do it, take a selfie, I don't like selfies, but here's one from the trail at the 5 mile mark.

With the trail staffed by volunteers with water, snacks, and maps, during the TVTC there was no need to strap a big pack on my back.  And I had been training for months anyway carrying my 20 pound daughter around.  So without her I felt like I was as light as a dandelion seedling blowing along.

The event was advertised as starting between 6 a.m. and 10 a.m.  Just show up whenever during that time, register and start your hike.  Rule #1 I learned: arrive early. Especially if you want company.  If you want the trails to yourself, come at 9:30.

I arrived at 9:30.  The parking lot was full but the registration tent was ghostly empty, save for the volunteers.

“How far are you going to hike?” someone asked me.

“Well, you could go on a little stroll, 1, 2 miles maybe,” the man suggested.

Grrrr, I thought to myself. Do I look like I’m just out for a stroll?  Do I look that out of shape?

I signed a waiver, took some maps and began my hike.

The trail was eerily empty, as if no one had hiked this way.  A small bunny skittered along the trail with me for a few paces. But otherwise it was pure solitude.  I even had to walk through a web a spider had spun across the trail. I wondered how far ahead other hikers must be for a web to have been spun during that time. But I mostly enjoyed the quiet, although I was partly unnerved by it.

The reality is that I’m troubled by the tide of technology that seems to have swept over everything in my lifetime.  I’m among the last generation that remembers life before cell phones, the internet, Ipads, instant information and 24/7 connectivity.    Yet I also harbor a certain culpability for not taming the tide, I use it too much myself. My phone is like a third limb, from mindless pleasures like Words with Friends to texts and email.

Recently when Aster was napping on my shoulder I found myself desperate for a connection to a book, not my smartphone and its endless supply of instant but often unsatisfying information.  So I grabbed the first thing within arm's reach of where I was sitting.  It was a novel called Snow Child, I bought it for Rachel last Christmas.  A Pulitizer Prize ficton winner, I thirstily drank in the words on the page.  The book is about the collision of self-sufficiency and fantasy in the Alaska wilderness.  A childless couple make a snowman in their yard on a cold night, actually a
"snow child" who comes to life. Or does she?  You'll have to read and decide for yourself.

INHERENT BEAUTY - A cardinal flower blooms along the trail 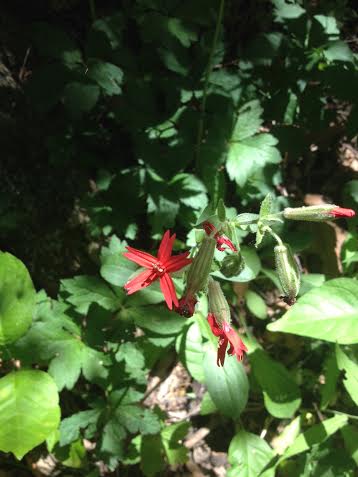 Yet as much disdain as I feel for technology, I am also a voracious user of it.  How does one reconcile this apparent paradox?  I pondered this as I walked.  But I also grew concerned.  I had charged my Iphone all night and yet 3 miles into my hike my battery was  drained down to almost  50 percent.   I didn’t want to be on this hike checking email, posting selfies or statuses on Facebook, I just wanted to hike.  But I did want to be able send a text to Rachel asking how Aster was or to use in the event of an emergency.  With half the battery already gone there was no way it would last for the rest of the hike. I cursed myself for being so dependent on the technology, but its the reality.

I sent Rachel the equivalent of an SOS.

“Switching phone to airplane mode to conserve the battery.  I’ll turn my phone on in a couple of hours and check-in.”

I remember the days before cell phones when people could be gone all day without checking in, you’d just leave a message on an answering machine.

Meanwhile, I passed crimson-colored cardinal flowers,  vivid golden rod, all soaked in a June day with pure sunshine and azure skies.  Crisp creeks rippled over smooth rocks carrying their liquid lives to some distant destination.   Otherwise not a sound.

I was completely alone.