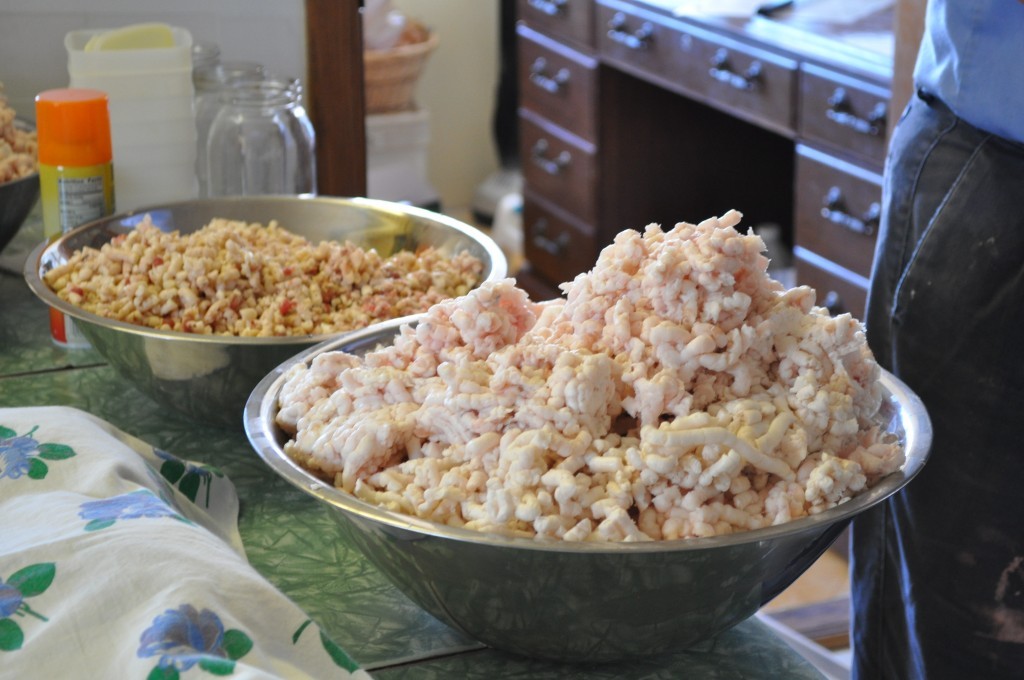 Ground, fresh pork at an Amish home in Kansas. Scenes like this are common across Amish settlements in February and March.

THE AMISH COOK
BY GLORIA YODER
We as a church gather each winter to butcher hogs.   It’s an enjoyable project, yet quite major.  It really is amazing to watch two dozen pigs being processed and, when it’s all over, have mouth-watering sausage and bacon to put into the freezer.

Butchering is not my favorite activity.  Since I’m on the food committee, though,  I had my fingers full of food  without being involved in the butchering part. There’s a lot of menu planning involved in feeding all the workers!

On Tuesday all the men, boys, and girls from our church dressed the 24 pigs, started trimming pork, and did some grinding, mixing and bologna stuffing to get a head start for Wednesday.

Wednesday was the big day.  The entire church was invited starting at 4 a.m.  Of course the mothers with small children usually wait to go until after daylight.

This year the butchering was held at my parents shop where my husband, Daniel, builds rustic furniture.  The front section of the shop is where we set up benches for everyone to sit down to eat.  A stove with a propane tank was also set up for us to cook on. Tables were set up with four food lines for the 100 people to file through at mealtime.  Another corner was used as a nursery and play area for the little children.  Daniel left the house a little before 4 a.m. while I took the liberty of sleeping until 4:15 a.m. After that I had to get things moving in order to have breakfast ready by 6:30.  The evening before I decided to wear the children’s wrinkle-free clothes to bed which could be worn the following day at the butchering.  That really helped me out.

The next morning I wrapped Austin and Julia in a blanket and carried them out to my cart where I had piled on food items and off we were. The short walk to the shop was crisp and cold but beautiful with the stars still twinkling overhead. Upon arriving I push the cart with the children and everything else into the warm shop.  After emptying the cart I got ready to assemble the pancake pizzas that we planned to have for breakfast.  The crusts, eggs, and sausage gravy had all been prepared earlier  and simply needed to be put together and heated.  Several ladies had also made yogurt, cinnamon rolls, and coffeecakes which we had  for breakfast.

By breakfast everyone was ready for a break and a bite to eat.  Once everyone was seated we first had a brief devotional and prayer before digging into the pancake pizzas.

Other ladies did well by pitching in and helping with clean-up after breakfast was over.  By mid-afternoon we set out coffee and tea along with the 36 dozen cookies we had  baked and taken along. Everyone could help themselves to those how and when they pleased.  There were a wide variety of cookie to choose from.

Lunch was served at 11:30.  Even though other ladies had brought casseroles, salads and desserts, I was a bit nervous  with being responsible to have everything ready. We had quite a bit of leftovers. People were snacking on cookies all forenoon!

After lunch, the butchering resumed. Every corner of the shop seemed to be occupied.  Some were mixing large batches of sausage and bologna, while others stuffed, smoked, or packaged.  It’s amazing what can be accomplished in a short time when everyone works together, taking responsibility for their jobs.

Each year several adults supervise the younger children with helping pick meat off the bones that were cooked in large kettles outside over an open fire. The children always ask for a salt shaker to season the pork they snack on as they work.  This year my sister-in-law was teaching the children what the kidneys were that were cooked with the bones and told them how she loved eating them as a girl. Hmmmm, it sounded a bit gross to me, but after trying it I couldn’t be negative over the flavor.  This meat is then grinded and then used for Pon Haus and liverwurst.

While preparing supper I was amused by what I saw in the nursery.  One of the church ladies was sitting on a rocking chair and was surrounded by children as she was reading stories. Her hands were full  with 10 children all trying to look at the book.  They covered her, sometimes she could barely even see the book she was reading.

Supper was kept simple. We served leftovers and finger foods. By 8 p.m. most of the greasy mess was cleaned up. We were tired yet grateful for a pleasant day of fellowship with church friends along with an ample supply of meat to fill the freezers. Would you like to try our pancake pizza recipe we used to breakfast? You’ll be sure to like it! (To "Danielize" the recipe like my husband eats it,  drizzle barbecue sauce over the sausage gravy and top with pepperoni!)