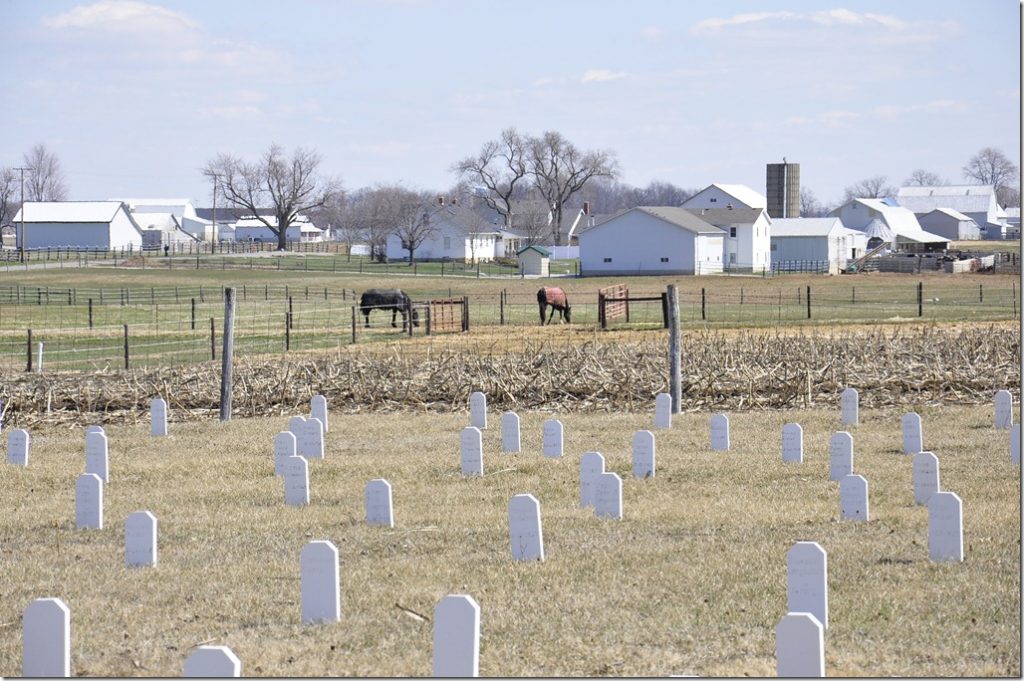 An Amish Cemetery outside of Grabill, Indiana is like the one where Gloria's Grandpa Raber was buried.

The life of a human is so precious yet frail.  We are constantly interacting with friends and family who are so dear to us, but in an instant any one of us can pass onto into eternity without having any say to it, whatsoever. Death is so final.

The past week the stark reality of the brevity of life became real to us in a new way.

Grandpa was someone who was very near and dear to me.  I grew up having Dawdy (German word for Grandpa) living close by. As a little girl I loved going to Dawdy’s where they played games like Candyland with me. Dawdy’s were always delighted to have us stop by and spend time with them.

Prior to their move to Flat Rock, he had a shop in Ohio where he repaired buggies.  When I was 7 years old he built a wagon for our family which was similar to an old-fashioned covered wagon.  The top half was removable which was nice during the hot summer months in southern Illinois.

As a young boy my Dad recalls having grandpa waking him and his brothers early in the morning to help with the chores on their dairy farm where they milked the cows by hand.  Dawdy taught his boys at a young age to pitch in and help with their work on the farm. My mother credits that as a part of the reason Dad is an exceptionally industrious worker who doesn’t easily give up the job at hand when it gets challenging.

Grandpa served as a deacon in the Amish church. His love for the Lord and compassion for lost souls stands out in all his sermons over the past years. Romans 12:12 is a verse he quoted many times in German.

Dawdy was the practical type. Why fuss over some trivial issues?  Dozens or perhaps hundreds of times over the years I have replayed Dawdy’s words: There’s just no use making a fuss over something that can’t be changed. You might as well accept it.

Whether someone dumped a big pitcher of milk, or I burned the pies, or my plans for the day didn’t turn out, his words were there to help me accept the situation at hand and move on.

On January 23 we got the message that Dawdy had a rough night with a persistent cough. He was taken to the hospital and diagnosed with pneumonia after 4 days   he was released to go home where a hospice bed was set up for him.

A few days later I sat with Dawdy and talked with him. Even though his physical body was weakening his zeal for the Lord remained strong as he quoted scriptures and answered any questions I had for him about the Lord. One of his favorite verses was Isaiah 40:31: But they that wait upon the Lord shall renew their strength. They shall mount up on wings as eagles; they shall run and not be weary; they shall walk and not faint.  “That works for any problems we have  whether it is work , home or at church,” he would say.

On February 22 we received the message that Grandpa wasn’t doing well at all.  My husband Daniel, Julia, Austin and I joined family members who were gathering by his bedside.  Although his mind was clear it was obvious his body would not make it through the night.  He had requested no life support or no treatment.  Death was not a dreaded thing for him and he was ready to meet his Maker.

We gathered around him and sang songs of Heaven and Jesus and read scripture and prayed. Tears flowed freely. Sometimes there were very few people who were able to sing through their tears.   Grandpa loved singing and it really seemed to soothe him in his last hours.   It was especially touching to see family members bending down by Dawdy’s side bidding him farewell, thanking him for all he had done over the years.

His prayer was granted. He had only a minimal amount of suffering until he drew his last breath. It was so difficult to see him go yet knowing he had reached his lifetime goal of being in Heaven filled my heart with awe and wonder.

The days that followed were a blur. Countless aspects need to be discussed and planned.  The two evenings of visitation and funeral were held at my parent’s shop where Daniel builds rustic furniture. Friends from near and far chipped in helping with cooking and cleaning and bringing extra tables, benches and whatever else was needed for support.

There were over 800 people attended the visitations and 525 at the funeral.  Amish friends from Ohio, Indiana and Kentucky arrived bringing food needed to feed everyone. We had a traditional Amish funeral meal. Thirty six loaves of bread were turned into ham and cheese sandwiches.  Along with that they had 5 20-quart canners of noodles, 20 gallons of potato salad,  20 gallons of glazed and mixed fruit and 900 cupcakes. Here is the recipe for the potato salad served at the funeral meal, it's one we turn to often for large gatherings.