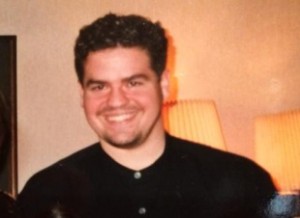 I was mortified when a friend of mine posted this photo of me on Facebook a few weeks ago...sheesh, what was I thinking?  The funky hair, the nehru collared shirt (looks vaguely like a priest)....Ah, fun times....New York City 1996, I was preparing for an evening on Times Square to watch the ball fall.  It was so crowded I just ended up sandwiched between two men from New Delhi, we were chest to chest, two strangers pinned to one another by the sheer force of the crowd. There was nowhere else to go.  I went with about 7 other people and we all linked hands just so we could stay together (pre cell-phone days, how quaint).  Our chain eventually snapped and those who got separated met back at my friend's apartment after the crowds thinned.

"I didn't imagine you'd be the one I'd be spending the first seconds of my New Year with," I grunted to the man pressed against my chest.

"This no what you call picnic for me either," he mumbled back in a thick Indian accent.