I often the lament the loss of long-time store chains.  It seems more and more we, in the United States, live in a retailer world dominated by Walmart and Amazon.   Whenever a chain of stores close, they take a lot of memories with them.  I've written often about my sadness at watching the slow-motion implosion of KMart and Sears, 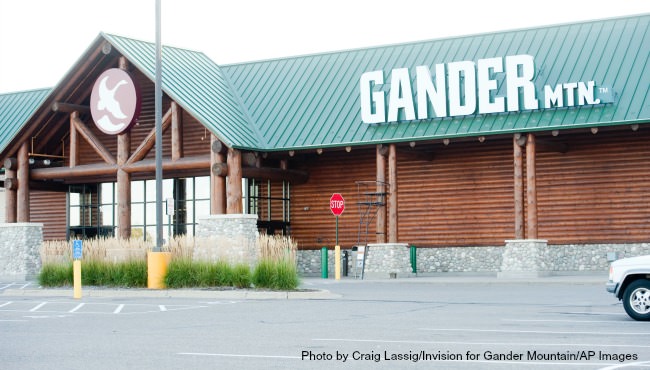 Gander Mountain is a popular outdoor-type store in the United States.

, but Hills Department Store is another one I miss.  I know we have readers all over the country and world so I hate to be too local.  Does anyone remember Hills?  What about Zayre?  Ames?  Those were all discount "K-Mart type" stores that have bitten the dust in my life time.  On a super-local level there was once a department store called Rink's that is gone.  Stores like JC Penny and Target have been closing more and more locations.

For some reason in Canada they don't seem to have the same issues with lack of variety in stores.  Canadian Tire is a big discount type chain that despite the name sells a heck of a lot more than just tires.  Walmart has a foothold in Canada too, but so do bunches of other stores.

Now here in the USA are some other stores that are on the chopping block:

GANDER MOUNTAIN  -  I can't say that I have ever been in one of these stores, they are an outdoor type chain like a Cabela's or a Bass Pro Shop but they seem to exist in smaller cities and towns more.  Here is a list of a bunch of them that are going under.

MARSH SUPERMARKETS:  This is a supermarket chain based in Indianapolis.  This chain has been struggling for some time, but it once had a storied presence in the Midwest.  One of its biggest claims to fame is that its location in Troy, Ohio was the first grocery store to ever use an electronic scanner to check out groceries.  But now all of these stores are teetering on the brink.  Click here to see more.