Ah today is "Throwback Thursday" so let's remember some of the gone, but not forgotten, memories of yesteryear.

AMUSEMENT PARKS: Americana Amusement Park, Fantasy Farm,Geauga Lake, Old Indiana Fun Park.'  These three midwestern amusement parks are now gone.  Should any others be added to the list?  I had my first job working the "Fool-the-Guesser" booth at Americana and I can remember a rooster biting my finger at Fantasy Farm when I was a wee lad.  Ouch.

STATION WAGONS:  I know, I know, things are much safer these days with rear-facing childseats and I'm not saying we should go back to those days.....but, I remember piling into the back of a station wagon when I was a kid.  We called the big cargo area the "nest" and we'd get to ride back there sometimes.  Ahhh, what fun...

DEPARTMENT STORES:   Ahhhh Montgomery Ward, McAlpins, Shillitos, Zayre, Rinks, Ames, and, finally, my favorite Hills.  My aunt worked in the snack bar at Hills and, really, they had the best pop corn and hot dogs in their snack bar.....the old Hills store now sits in my hometown empty, a ghostly vacant reminder of a once thriving retail past.

BOWLING FOR DOLLARS:  Does anyone remember this show?  Not the most exciting TV in the world, but it was probably my first and only exposure to bowling when I was a kid.  I remember it being a fun show.

SMOKING SECTIONS IN RESTAURANTS:   That's laughable looking back....like someone sectioning off smokers made it better...maybe a little bit....I'm not being anti-smoker here, but I am being anti-smoke.....are there any states that still allow for smoking in restaurants?  A judge of a bake-off once told me that she could tell if a contestant was a smoker because the tobacco taste would get baked into the food.   And, sheesh, I can remember as a kid when smoking was allowed on airlines.   Not fun being 30,000 feet up in a tube full of smoke.....

Hardy Boys Books:  I know the books are still sold, but do they still crank out new ones?  Man, I loved those books when I was a kid.  I never could get into Nancy Drew (I guess Hardy Boys was meant for boys and N.D. was meant for girls), I also liked The Three Investigators.

And what the heck were my brother and I all dressed up for?  I don't think anyone in our family remembers. Gotta be for a wedding or something 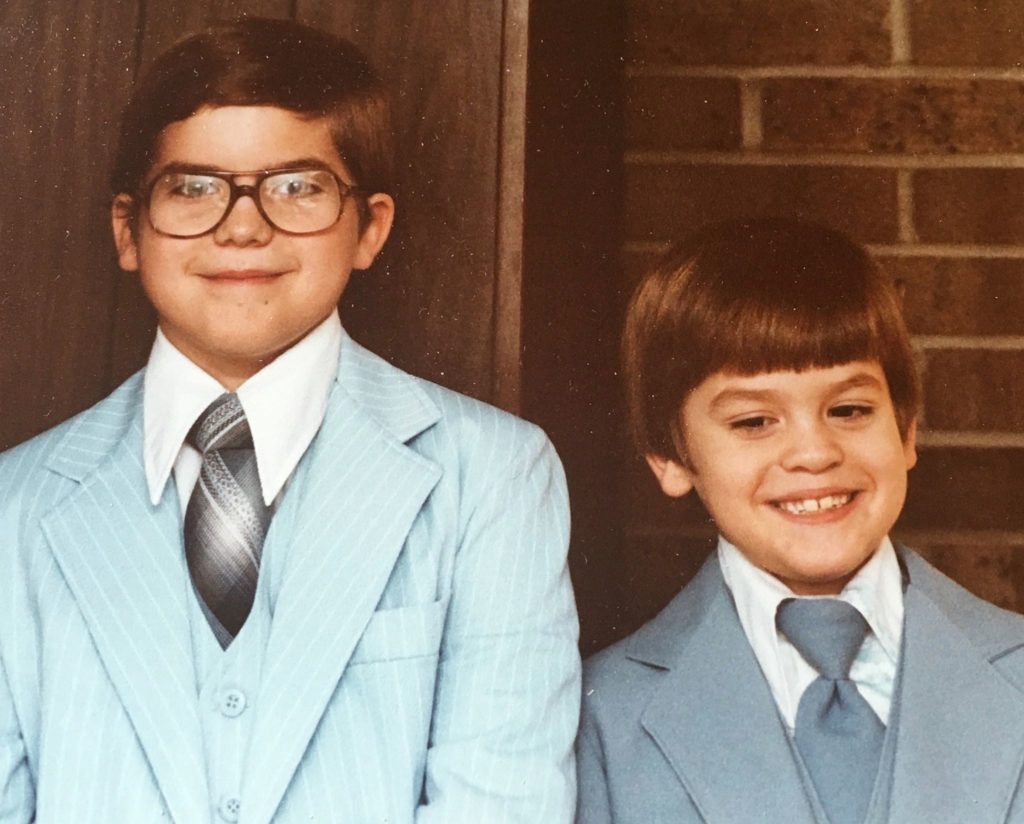 And if I am going to be on a nostalgia kick, this my Grandma's recipe for homemade potato salad, we call it "SIX SPOON POTATO SALAD" because she'd use about six spoons to taste it as she adjusted the seasonings and formulation.

Instructions
« Trenton, Ohio's Amish Past
Amish Etsy: Am I Too Sensitive? Amish Bunny? And more! »