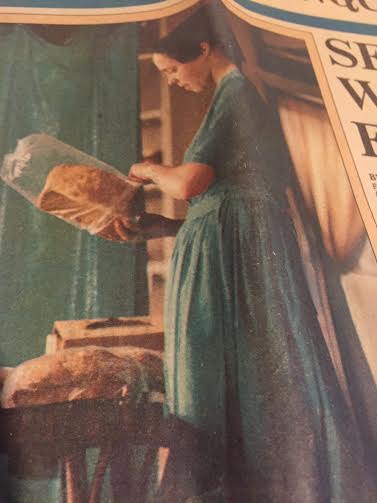 A rather incredible photo for 1987....wonder where the girl is now? 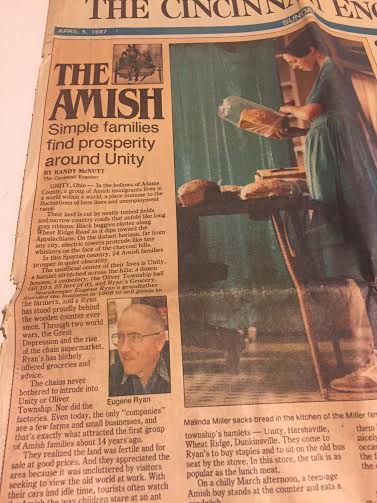 This article appeared on the front page of The Cincinnati Enquirer on April 5, 1987, it was a superb piece!

When I look back at my life and the route it has taken through Amish settlements in almost 20 states and Canada one factor that ignited an early interest in the Amish was a newspaper article that ran in The Cincinnati Enquirer back in April 1987.    I had forgotten about the article until I came across it recently in some old papers of mine.  I'm glad I saved it. Even now the article evokes a quaintness and comfort that newspapers once routinely delivered.   This morning I held a copy of that old Enquirer.  Wow, newspapers have shrunk in the almost 30 years since this piece was written.  This is a crisp broadsheet.  The layout of the story is homey and catchy.  The Enquirer ran the story as what we used to call a "Sunday package", front-page story with sidebars and plenty of photos.  The story was written by Randy McNutt and shot by Michael Keating.

You what really surprises me about this piece?   The front page story clear has an Amish person photographed packaging some homemade bread.  Her name is Malinda Miller and I think she's 17-years-old in the piece (Yikes, means she'd be almost 47 now).  I'm just surprised the photograph was permitted.  She clearly knew she was being photographed.  Today the Amish - in many cases - are more circumspect with regards to photography.  But back in 1987?  This was a superb piece of photography for its day.  We are talking about an era when photography was almost totally taboo in most Amish settlements.  I'd hear occasional stories of Amish men grabbing tourists' cameras and running over them with their buggies.  No sure if those stories were true or just legend, but it illustrated the thinking of the time.  While many Amish still do not want their photos taken, there definitely has been a loosening of some of the thinking surrounding it.

The article states that 24 families live there.  Wow. THAT has changed.  This is only a guess, but I am thinking that number is now closer to 80 - 85 families.   And when each family has usually six or more children, we are talking about an ever-growing group of Amish people calling these hills home.

I was only 15-year-olds when this article came out, but it stayed with me and about as soon as I was able to drive I headed out to Adams County, Ohio to explore.

There's a photo you might see in the picture of the newspaper of a non-Amish man.  His name is Eugene Ryan.  His family owned a small grocery in the middle of the Amish settlement for over 100 years before Eugene passed away in 2010.  I wrote about his passing and about Ryan's Grocery here.  That corner where Ryan's once sat is still empty and I always get a little sad when I see it now.