Yesterday, Gloria wrote about "toilet paper cake."  A few people expressed surprise that we didn't include a photo.

The Amish - generally - don't allow photos of themselves.  Camera ownership, though, is an interesting secondary issue.  In some Amish settlements camera ownership is permissible, although most they are not.  The most acceptable kind are usually the "disposable" type.  Taking photos of animals at a zoo, for instance, is a fun pasttime for many Amish.  Or perhaps photographing scenery.

Gloria's church doesn't allow cameras.  Photos you see with the column are usually ones that I have taken on oneo f my visits. I try to take a gazillion photos when I visit so I can stock up on them.  We are trying to see if there is a way to somehow compromise and allow her to possess a camera somehow and take photos for us, but so far we haven't come up with a way. And I have made it clear to Gloria that I would rather have far fewer photos with the column and respect her church rules than somehow taking photos and violating those rules.

So, while Gloria couldn't take a photo of "toilet paper cake", I found a photo on Craftbit.com which I am sharing here. 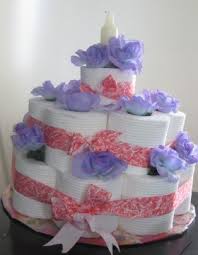 This is what Gloria wrote about the "toilet paper cake"

The ladies showered Mom with a wide variety of gifts which included baked goods, a beautiful homemade rug and a book entitled “Faithful and 50” and many other useful items.  Unknown to mom, we were also Planning a toilet paper “cake.” Have you ever heard of such thing?  A 4-tiered cake is constructed with rolls of toilet paper, each containing a little gift in the center.  Each tier is then tied together with ribbons and decorated with bows, flowers and so forth.

In next week's column Gloria will tell a bit more about the cake, for instance what little gifts were put down in the rolls. Should be interesting!  (and, really, who comes up with this stuff?  Don't get me wrong, it's very creative and I'm glad we have people out there that are, but someone has more time and creativity than I!:)