Tom+Chee is restaurant focusing on the all-American staple: grilled cheese. 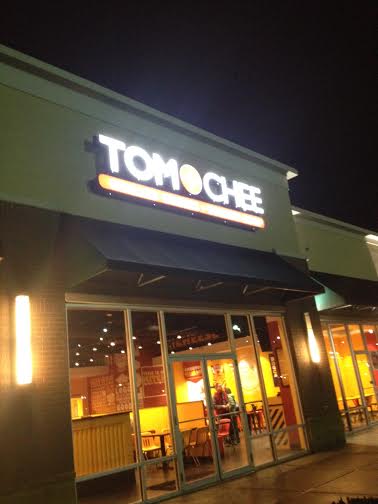 Tom+Chee is restaurant focusing on the all-American staple: grilled cheese.

Tom+Chee Review: Grilled cheese is classic comfort food. That fact hasn’t escaped even the Amish who enjoy the all-American sandwich and often refer to them as “cheese toasties.” But not all cheese toasties are alike and that point was driven home the other night when I sampled a restaurant called Tom+Chee which recently opened a restaurant near us.   You may recognize the eatery from ABC's show Shark Tank, which catapulted them to fame. 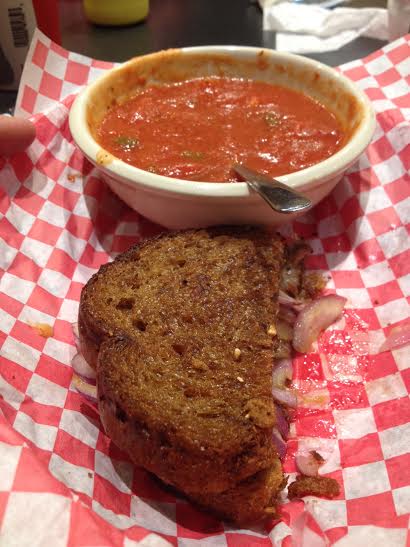 My problem (I’m not sure whether the hearty appetite is the problem or the sandwich) is that often a grilled cheese sandwich doesn’t do it for me. I’m hungry two hours later. Tom+Chee takes care of that problem by offering a double-decker version. I should have gotten the double decker version because, as always happens, I was hungry a few hours later.  I marvel at people (like my mother-in-law or my father) who can eat half a sandwich, declare themselves full and satisfied and take the second half home.  If I wonder why I struggle with weight, that is my answer right there.

Anyway, back to Tom + Chee's.   I ordered the “`shroom and swiss” grilled cheese…Swiss melted between two slices of rye with lots of mushrooms and onions packed between. They also offer a limited line of soups. In fact, the “Tom” in the restaurant’s title is shorthand for “tomato soup.”  I got a bowl of chunky basil tomato soup. 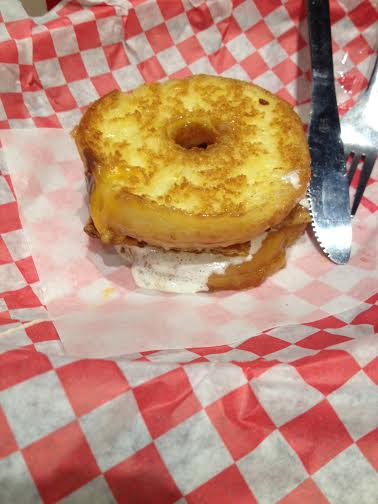 What really captured my imagination is Tom+Chee's dessert menu of "grilled cheese" doughnuts.A grilled cheese doughnut? Yep…I was flummoxed how a grilled cheese doughnut could actually taste anything but wretched. But, to my surprise, it was a delicious dessert and I really didn’t even notice the cheese.  Rachel and I split a dessert but I could have easily eaten a whole one.  But at $5 a pop, that'd be kind of expensive. If you think how cheap you can get a great glazed doughnut, $5 seemed a bit pricey for a essentially a dressed up doughnut.  If you want to make your own grilled cheese doughnut at home, Tastespotting offers a recipe. Click here.

Tom + Chee features bright and cheery décor and affable employees.  I think Aster enjoyed the atmosphere and garish colors. Can  a restaurant focused solely on grilled cheese survive long-term?  It strikes me as sort of a "faddish." type place....I'm sure Rachel and I will go back,but will we still be 10 years from now.  Maybe, grilled cheese has hung on as an American staple for a long time, but you can also make it in your own kitchen with your own cast-iron skillet for far less time and money.  So that is the paradox of Tom+Chee: it takes one of the most accessible, unimaginative foods imaginable and turns it into a restaurant concept.   Time will tell whether it will survive, but next time I go, I'll make it a double-decker.