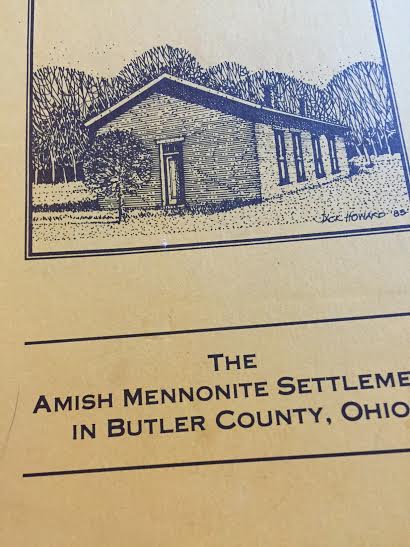 Trenton, Ohio is a small town in southwest Ohio.  It’s basically a “bedroom” community with people using it as basically a base community to commute to their jobs elsewhere.  I know Trenton better than most, I spent 10 years there as a newspaper editor covering everything from craft shows to council meetings.   In retrospect I am amazed I was able to fill a weekly newspaper week after week with stuff from that small town.

When I first arrived in the early 90s I had just launched The Amish Cook column and my studies of everything Plain.  I wouldn't discover until years later that, in fact, this small town had a past that was very much intertwined with the Amish.    Trenton was a sleepy one stoplight down back in the early 90s (I think it has 5 or 6 today).   And today the Miller Brewing Company sits south of town churning out batches of brew.  It is just south of the Miller plant that the heart of the once thriving Amish settlement sits, preserved at the Chrisholm Historic Farmstead.  But there are other traces of the area's Amish past nearby.

There is an “Eicher building” in downtown (a common Amish last name) Trenton and a Mennonite church which still worships today and is a remnant of the Amish population which once thrived south of town.  In fact, when I was editor of the paper in the 1990s there were still old-timers around who remembered the church’s (common among Plain churches) of seating men on what side of the church and women on the other.

Local historian Doris Page wrote a superb booklet about the area’s Amish community.  What makes this little booklet quite amazing if you think about it is that it was written back in the pre-internet age.  So Page meticulously crafted a narrative of the settlement pulling from obscure historical sources.

Trenton for all its overshadowing by larger neighbors like Dayton, Cincinnati, Hamilton and Middletown has some fascinating historical tidbits. Charles Richter, inventor of the Richter scale, was from here. As was the founder of 4-H., A.B. Graham.  Hollywood star Doris Day also spent summers here years ago. I think she had a relative in town or something that she would come to visit.

Join me this Saturday at the annual Chrisholm Reunion at 11 a.m..  I'll be giving a talk about my Amish experiences and about the Chrisholm community.  The address there is  2070 Woodsdale Rd. Reservations required, the cost of the talk is $10 for non-Chrisholm members. Email me at [email protected] if you plan to attend!