Sam Mullet and his Bergholz clan have been made into monsters in the media over the past few years due to the beard cutting attacks.   Now, hear me out...I don't want anyone thinking I am condoning the attacks. I'm not.  I'm a very forgiving, open-minded person but no matter how you square or spin the story there were people who were attacked, terrified, and suffered bodily harm and you just can't run away from that.  On the other hand, there are almost always two sides to every story.  It's so easy to just gobble up media stories like a kid with Halloween candy.  The purpose of this post is to just remind people of that, to read between the lines, to think critically.

I spoke with Sam Mullet's attorney, Ed Bryan, for a long time this afternoon and (yes, he is Sam's attorney, of course he is going to be an advocate for him) but if you listen to him, he paints Sam as a much more sympathetic, theologically grounded man who is a doting grandfather and Dad.  So which is he: a cult-leading monster?  A doting granddad and devoted husband who wanted to start a more theologically pure Amish settlement?   A bit of both?  Or somewhere in between?  I guess my point is that you need to approach everything with an open mind.  That's all I'm saying.   Sam Mullet may well be the monster he's been portrayed as, but he might also not be.  People have said some pretty kooky things about me before too, or accused me of some bizarre things, and I'll scratch my head and say "huh?"    Just because someone says something doesn't make it truth. 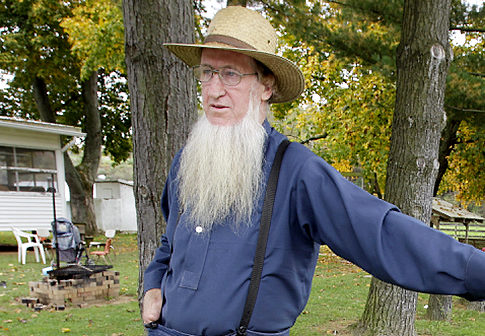 I hope to journey to the settlement of Bergholz soon to see for myself what is going on there and report back.  Stay tuned.

But here are some takeaways from my conversation with Ed Bryan:

I asked him what the next step was with the legal aspects of the case.

"We are taking a wait and see approach," Bryan said, explaining that the government has several avenues it can pursue. "We also have some options as it relates to other issues that the court appeals did not decide, one of which would cause the case to be totally dismissed. They didn’t decide for or against us on that issue. The issue is to challenge Congress’s authority to pass a hate crimes statute to begin with, Congress overstepped its bounds in interstate commerce by passing the hate crimes law.  If they address the issue in our favor the case could be dismissed by the court."  Bryan said.

"His reaction is guarded. He was happy, but guarded. Far from out of the woods.  Still faces another trial.  It is a step in the right direction,"  Ed Bryan said.

Bryan said much of the coverage about Sam Mullet and Bergholz in general has been unfair.  Ed Bryan was also critical of Amish expert Don Kraybill's new book about the Bergholz happenings, saying that he didn't reach out to him or sit down with Sam Mullet to interview him.

"He has been seriously maligned, mainly by other Amish," Bryan said.

Over the course of my travels in Amish settlements  I've heard all sorts of allegations about Sam Mullet told to me by other Amish.  I've not printed any of them because I couldn't substantiate them, but there is a tendency to "pile on" on these cases.

Clearly people were attacked, but was it part of a tight-knit conspiracy driven by religious hate or was it a more muddy case of family on family feuds driven by intense interpersonal relationships.  I come from a large Italian family and, believe me, they can get pretty clanish and strident when they have arguments.  No one has shaved anyone's beard off, but it can get pretty intense.

Again, I'm not defending Sam Mullet or the Bergholz clan, just trying to put a more nuanced perspective out there than what is often reported.