I have to admit, I felt a tinge of envy when I did this interview.  I’ll repeat what I wrote the other day:

People who have been around Amish365.com awhile know that a couple of years ago I spent months “in the trenches” working on putting together a respectful, wholesome Amish-themed reality TV show (I was approached by producers, not vice-versa). After six months of work, I realized that what I was looking to do and what the producers were looking to do just didn’t mesh.  Most reality TV production companies want screaming and shouting and contrived drama. I felt you could be entertaining and educational while being respectful. I still believe that. 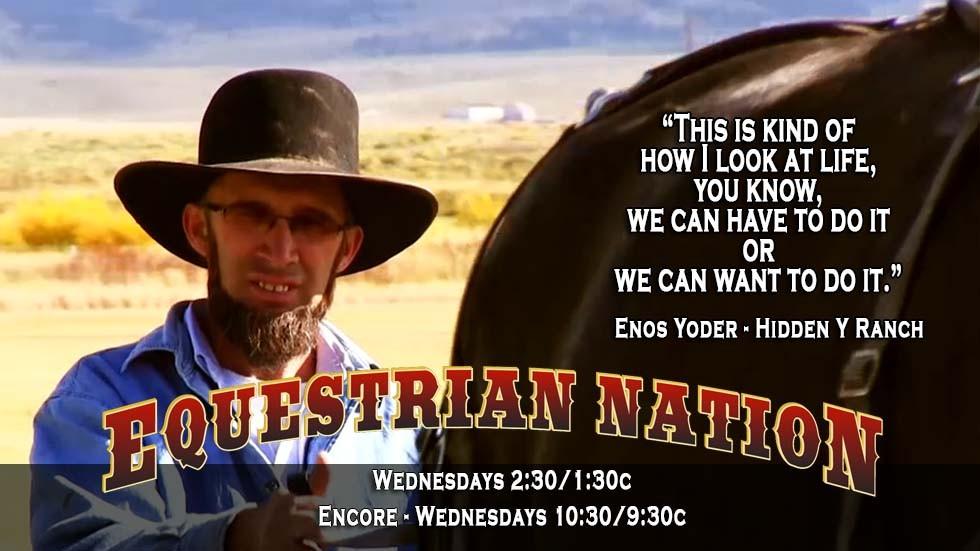 So, here’s a guy who knew the right people at the right time and had the right skills to pull it all together.  The result:  The Amish Horseman on RFD-TV.  This is a three-part series that debuts today, May 14, (2:30 p.m. and again tonight at10:30 p.m. Update: arrrrggghh...RFD's site said the channel was available in Cincinnati on Time Warner Cable and that was correct but ONLY if you have a "choice package" from Slime Warner Cable...I am super bummed, I really wanted to see this...so I'll  explore any alternate viewing options and report back!)

Dan Weyand is the executive producer of Equestrian Nation of which The Amish Horseman is a series within (DVR alert, if you look for The Amish Horseman on your DVR you won't find it, you have to search under Equestrian Nation) .  Dan  has been working with horses for over 30 years and in film for almost as long.  His title is executive producer, but he prefers to be known as a filmmaker. And that means he filmed, edited, and basically did everything with the film.   If I had had the photography/cinematic skills to do the show myself that would have helped a lot, but I was at the mercy of producers.  Anyway, The Amish Horseman took root long before Amish Mafia and Breaking Amish entered the pop culture silliness scene.
Dan describes meeting Enos Yoder (aka The Amish Horseman) for the first time:

“I was at the California Draft Show Sale in Tulare, California in 2010 and he was there like he always is, and there was a horse that I wanted to buy and I just started talking to him about the horse and then I met his family.”  Enos and Norma Yoder have five children.   Dan describes Norma as “charming”, but a bit camera shy.

“We just got to know one another at that sale.  I always have cameras with me because that is what I do. I shot some footage at the sale and specifically of them and then six months later I saw him again and said I would love to do a story about you and I want to bring cameras,”  Dan recalls.
Dan owns and operates Maravilla Productions which produces the show Equestrian Nation on  the RFD channel

“I didn’t even know about Amish Mafia and all of those shows when we started this,” Dan said.  And he’s sure that those shows did create some backlash and resistance in Eno’s settlement.  As a personal note, this was ABSOLUTELY the case when I was trying to put together my program.  Amish Mafia pretty much poisoned the well.  Many Amish who probably would have been willing participants in a respectful show balked after Amish Mafia and Breaking Amish came on the air.  But Dan continued his quest and, in the end, came up with a 3 part series he is proud of.

“I am sure the people were saying “don’t be on TV, not good for the religion, but when you see these shows, this is a very, very positive view into their lifestyle and if you get anything out of these shows, you almost envy their lifestyle,” Dan says.

“Through this TV show I am trying to do anything I can to support my world view that things are too fast…this show is wholesome and supports the horse,   which is so opposite from an iPad and an iPhone.”

The show was shot over a 2 ½ year period.  And while you will get some glimpses into the Yoder’s day-to-day life, the focus is truly on the horse (which, I’m guessing, is what ultimately made this show possible).

“His wife wasn’t totally comfortable with the camera. Enos was more comfortable because he sells horses.  I’m sure she had some deep-rooted feelings about the camera, she went back and forth about whether it was the right thing to do,” Dan recalled.

This is pretty much in line with what I experienced when trying to put together my show.  In several cases I had enthusiastic husbands who ultimately reversed course because of wives who didn’t want any part of it.

The Yoders live in the relatively new settlement of Westcliffe, Colorado.   Dan describes the community as maybe a bit more liberal than some.  He’s not sure whether Enos ultimately got permission from church elders or whether he just decided to wing it and deal with the consequences later.

“But it was always about the horses…that is what Equestrian Nation focuses on…and the Yoders still use horses for recreation, farming, and transportation. That is the main angle of the series.”Still you get glimpses into the rest of their life.

“It is amazing. It turned out like something like no one has ever seen.  We were able to get the wife and children and what they do every day, doing chores, driving horses,..we went inside their world in their home.  They have a little 12 year old girl that can ride and drive the horse and is not scared of anything the Yoders  have their own little horse whisperer!”

Note: I am still awaiting some photos from the network that I might post, when I get them I will share them.  Meanwhile, here is a photographer who blogged about his photo assignment in the Colorado Amish community.   Some great images there to enjoy!