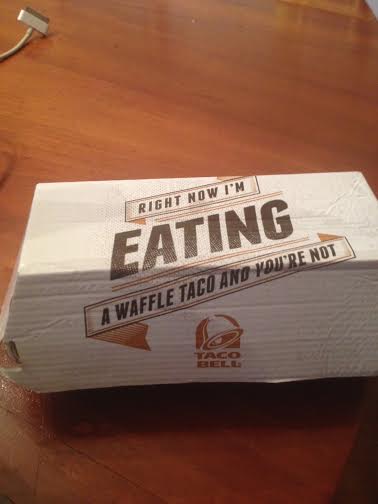 Amish culinary culture is influenced by pop culture. Pizza is now as common in Amish kitchens as it is on Super Bowl Sunday. And  as McDonalds and other fast food joints have made inroads into Amish country, the fast foods are often  "copied" at home.  I've seen Amish recipes for homemade "Pizza Hut breadsticks" and homemade "McDonald's Fries."  Breakfast burritos are a great example of the fast-food culinary influence.  The previous Amish Cook columnist makes superb breakfast burritos.  I'd rather have one of her homemade version any day.  A homemade breakfast burrito would simply be a tortilla loaded up with scrambled eggs (key difference: fresh), cheese, and maybe some meat.  Again, the meat would probably be home-raised.  Breakfast burritos have become popular in Amish homes.  You can make them the night before, freeze them and reheat when needed.

According to Wikipedia, Tia Sophia's, a Mexican café in Santa Fe, New Mexico claims to have invented the original breakfast burrito in 1975, filling a rolled tortilla with bacon and potatoes, served wet with chili and cheese. Fast food giant McDonalds  introduced their version in the late 1980s,and by the 1990s, more fast food restaurants caught on to the style.

In a hurry for breakfast this morning I pulled up to the drive-thru window at Taco Bell and immediately  realized this was going to be a different breakfast experience than McDonalds.  McDonalds down the road was packed.  There wasn't a single car in the Taco Bell lot.

"How can we start your day right?" a cheery voice purred through the speaker.  Definitely a soothing voice and greeting, just what one needs to begin the day.

I ordered a waffle taco and a burrito and pulled up to the window.

"It'll be just a minute as we draw up a fresh waffle for you," the woman cheerily said.  I envisioned grandma in the backroom with an old-fashioned waffle iron spooning fresh batter onto a heavy, sizzling iron.   Never mind, that it's all computerized and quick....The staff had clearly been coached well.  I'm not sure any amount of coaching, though, can turn a "waffle taco" into a gourmet breakfast. 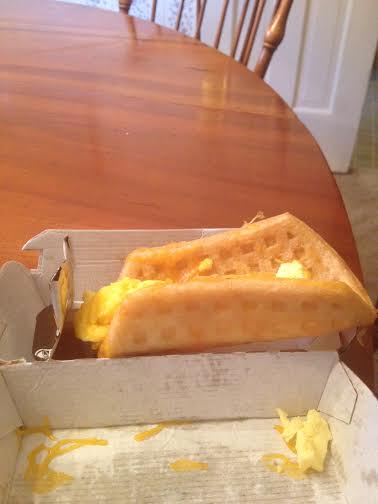 This is a photo of my egg and cheese waffle taco (you can get them with bacon or sausage also), balanced on the edge of a little packet of dipping syrup.  The package just says "syrup."  Not maple syrup.  Not pancake syrup.  Just syrup. Slightly unsettling. 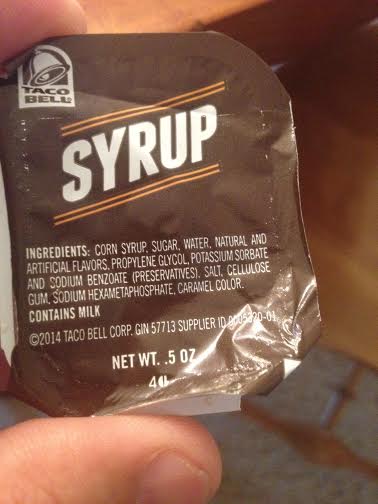 The burrito was also OK, but nothing amazing.  Maybe next time I'll try the A.M. Crunchwrap.  But it does beg the question: will you soon see "waffle tacos" in Amish kitchens?  It definitely wouldn't surprise me.  Homemade waffles are popular, so why not wrap it around some eggs?  But I can guarantee you the Amish homemade version will be better than the fast-food creation!

Print
Ingredients
Instructions
Wordpress Recipe Plugin by EasyRecipe
3.2.2646
Here is a popular Amish recipe for waffles. Very basic,  but the addition of cake flour I think makes for a very crispy waffle exterior, while soft and fluffy inside.  Use this recipe to make your own waffle taco!
« Thursday Marketplace Feature: Lynette Sowell - Amish Fiction Writer
Amish Autumn Photo Mash-Up »