This is our weekly round-up of anything and everything Plain that I've scoured the blogosphere to bring you this week, so buckle up, jump into the blogmobile and let's explore!

FINISHED AMISH WATERCOLOR:  For all the newcomers we have here, Cheryl McNulty is a Rhode Island-based artist who paints some very vivid images of Amish scenes.  I love her work because I think she does a great job of capturing the "soul" of the subjects she paints.  This finished image of a young Amish girl is no different.  She captures Lancaster County style very well, it'd be interesting to see Cheryl paint an Amish scene from, say, Berne, Indiana to see how well the differences are represented.  Anyway, another gem from Cheryl, what do you think? Click here to see!  She suggested I take up painting. I don't know, at first I dismissed the idea, but it would be a fun creative outlet.  I'll have to mull it over!

MENNONITE BANANA TEA BREAD:  Banana recipes - for reasons that escape me - never seem to do especially well with our Amish365.com readers, but this looked so good, how could I not share?  Somehow I missed it when it was first posted in January, but I bring it to you today.  Click here.   Sounds like the blogger lives a very simple, homesteading type life in South Carolina...sign me up!:)

PEANUT BUTTER FINGERS:  I can find my way around the kitchen pretty well.  I've done cooking and baking demos on TV and can recreate an Amish recipe with the best of them.  But, sheesh, who got the better end with this recipe?  I tried making "peanut butter fingers" several years ago on Amish365.com and you can see how mine turned out. 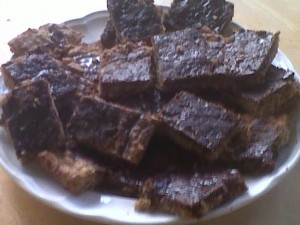 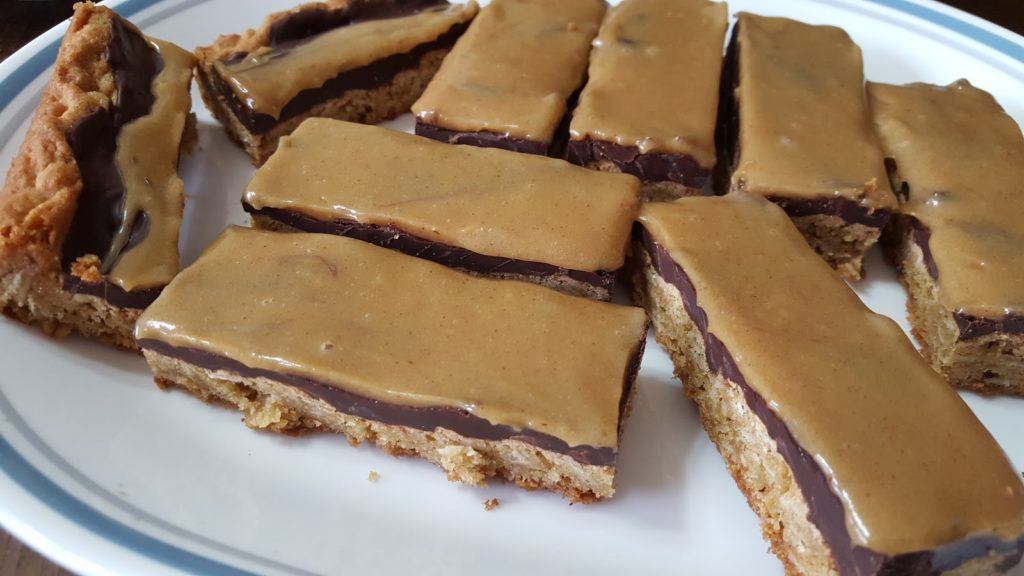 This is Patricia's Patchwork's version of peanut butter fingers...looks yummy!

Patricia's Patchwork blog tried them this past week and hers look far better than mine!  The recipe is popular among Amish cooks, it's an easy after school snack.  And judging by the photos, I'd rather go to Patricia's house after school, not mine!  Click here to get the recipe for this delicious snack!

AMISH EASTER EGGS:  This is an interesting blog post about "Amish Easter eggs."  First of all, a large percentage of Amish don't color eggs at all, it's an activity seen as a frivolous undermining of a solemn occasion.  Other Amish do color eggs and eat chocolate bunnies for precisely the opposite reason the others don't: it is seen as frivolous, harmless fun that doesn't undermine the solemn season.  So, take your pick, you'll find a wide range of views among the Amish.  The Amish that I have seen coloring eggs usually just do some with food coloring and vinegar and water and that's that.  Actually, when re-reading the post I think this is a classic of case of  the terms "Pennsylvania Dutch "and "Amish" being used somewhat interchangeably.   I think most of the beautiful designs seen here would be more likely to be found in Pennsylvania Dutch homes with deep and rich traditions more than Amish homes.  That said, could there be some Amish in Pennsyvlania who paint their eggs like this?  Definitely possible, but I don't think you'd find this style throughout Amish America, I think it'd be confined to eastern Pennsyvlania's settlements where the PA Dutch culture is deeply rooted. Click here to see the eggs.

I've said before that the vast majority of Amish I've met are not a somber, severe people. Wicked senses of humor are common.  If I thought, using my vast years of experience in this area, that either of the posts below would be offensive to the Amish, I wouldn't share them, I think most would get a good laugh out of both (In fact, the second one, I know some Amish who have seen it and been quite amused)

Amish Paradise:  The Moe Lane blog posted Weird Al Yankovic's 1996 parody of Coolio's "Gangsta Paradise" so I thought I'd link to it.  Not to read too much into Weird Al's work,but it was actually pretty prescient.   1996 was a period of rapid change in American society as the internet was really beginning to explode throughout society, so this parody sort of plays to that, I think.  And the video sort of "saw the future" in the sense that that was about the time when Amish fiction really started taking off as a literary genre and pop culture phenomena.  Click here to watch this fun video.