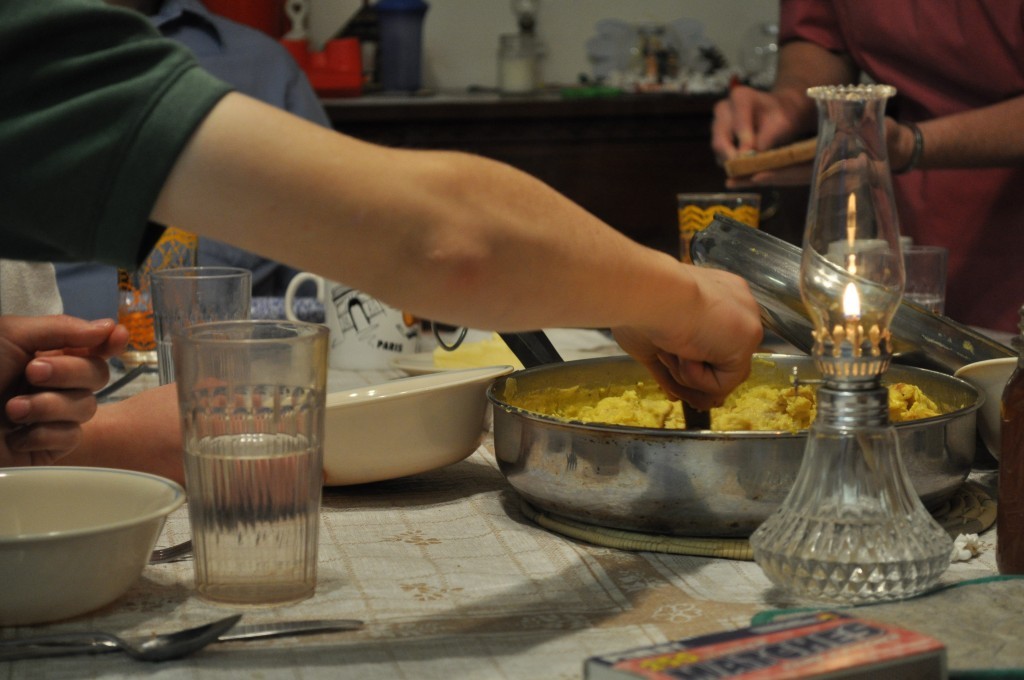 Supper at an Amish home in Kansas. I had found a family who agreed to host me for this reality show....

In the summer of 2012, Amish on TV was “hot.”  Amish: Out of Order was airing to record ratings on the Nat Geo Channel.  Meet the Hutterites also made a big splash on the Nat Geo Channel.  Breaking Amish and Amish Mafia were not far behind and racking up ratings.  So TV production companies eager to strike Amish ratings gold were tripping over themselves to create shows built around the Amish. This was ironic because the vast majority of Amish don’t want to be on TV.  So, in the end, many of these producers would come knocking on my door asking if I could help them find an Amish family to participate in this or that documentary or program.  It was actually quite incredible how many producers called and emailed me thinking I might be able to help them. But, really, it’s just not that simple. Even if I had Amish friends willing to be on TV, I’d hard just throw them to the TV producer wolves.

Eventually one TV production company in Los Angeles approached me with a proposition: they wanted to do a show that would focus on me living with an Amish family…a sort of classic “fish out of water” formula, but it’d choc full of educational information because of my knowledge of Amish culture.   I was quickly matched up with a top-flight Hollywood reality show attorney who began negotiating deals.

From a personal standpoint, the project pushed all the right buttons. I had just turned 40 and I was seeking some sort of “back to basics” experience.  The pay would be nice too.  And I was assured that my show would be educational, respectful, and non-sensational (SIGH, that is actually code for "boring" in TV land, in the end I don't think the TV show worked because I had a certain more cerebral vision while producers wanted screaming, shouting and action)

It took me 10 long months to find some Amish families willing to participate in such a show in a journey that took me from Michigan to Virginia and ultimately to Kansas.  And in the reality TV business, 10 months is a lifetime. By the time I finished setting up the show, reality TV had lost interest in the Amish and all this time and money I spent making this short 5 minute video was for naught (Oh,  “you’ll be reimbursed for your expenses” I was told….Yea, right)….In TV producer parlance, I learned later, this tape is called a "sizzle reel", a promo meant to entice networks. Ultimately, though, I was hung out to dry by the production companies and I doubt this "sizzle reel" was ever shopped around.  The Hollywood agent stopped returning calls and reality TV moved on to other topics (Alaska seemed to be really big for awhile).   Meanwhile,  I think I would have personally and spiritually benefited tremendously by spending that time with an Amish family, but it never happened. Still, I think fatherhood has delivered many of the life lessons I was hoping to glean from the show.  In fact, I didn't know it at the time, but when this video was, Aster's arrival had already been set in motion. She'd been born in September of that year.

Click here to watch the "sizzle reel" that I made for the production company.