Gender roles are obviously well entrenched in Amish society, although that does seem to be changing gradually.  There was an Amish woman I met in Geauga County recently who sounded a very unusual note when she told me that she liked to “focus on running the families businesses and not staying home and cranking out babies.”  Yes, those words from an Amish woman.

I couldn’t believe my ears.  But she definitely was/is not the norm.  Most Amish women still stay home and raise families and perhaps participate in a home-based business.  Which brings me to this cake, I suppose when you work as hard as most Amish women do you can be forgiven for wanting an easy to whip up cake, hence, being named Lazy Woman’s Cake.  This cake could be considered vegan, a surprise, because there is no egg in the recipe.  That’s not an omission.  But this quirky cake is good with a thick layer of frosting or dusted with powdered sugar.  This is a photo of it, and you can check out the recipe below:

Ingredients
Instructions
Wordpress Recipe Plugin by EasyRecipe
3.2.1275
Also, there is another recipe that would be common in a Mennonite kitchen especially if happened to be short on eggs. ake this cake and use the fluffy white frosting recipe from a Mennonite woman in Virginia which appears below. 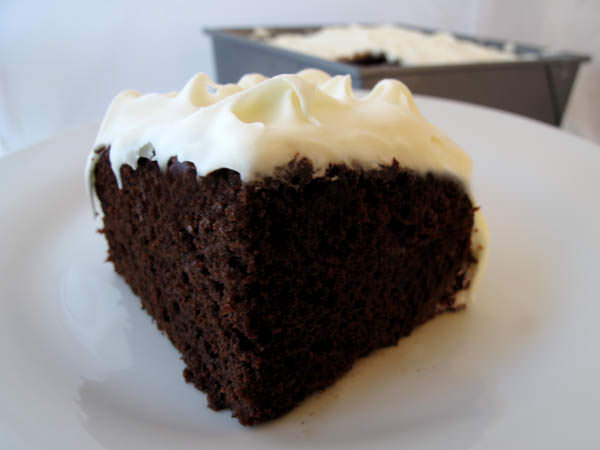 Stir together first six ingredients over simmering water in double boiler.  Leave until clear. Remove from heat.  Add egg whites and beat awhile. Put back and beat 3 minutes longer or until you have semi-stiff peaks.  Can be put on cake while frosting is still warm.