One of the things about the Amish is that you can find an exception to almost every rule.  Truly.  For instance, the vast majority of Old Order Amish worship at home.  But there are a handful of settlements that have a church building.   The vast majority of horse and buggy Amish reject electricity. But there are a handful of "electric Amish" communities that do allow one to be "one the grid."  And there are plenty of individual exceptions to typical customs. For instance, I've seen some Amish smoking cigarettes even though most do not.

So here are six of the most unusual things I've run into when visiting Amish settlements. These things either surprised me or upended conventional wisdom.  My list could be a lot longer than this but I just picked six that were near the top of my list.

Jewelry Amish:  I’ve never seen an Amish woman – or man – wearing jewelry.  Except once.  At a “bent and dent” store in Wisconsin several years ago there was an Amish (and she was Amish) woman checking us out and I noticed she was wearing a ring on her ring.  To this day I regret not asking her more about it, but there were a ton of people in line and I just didn’t. SIGH. 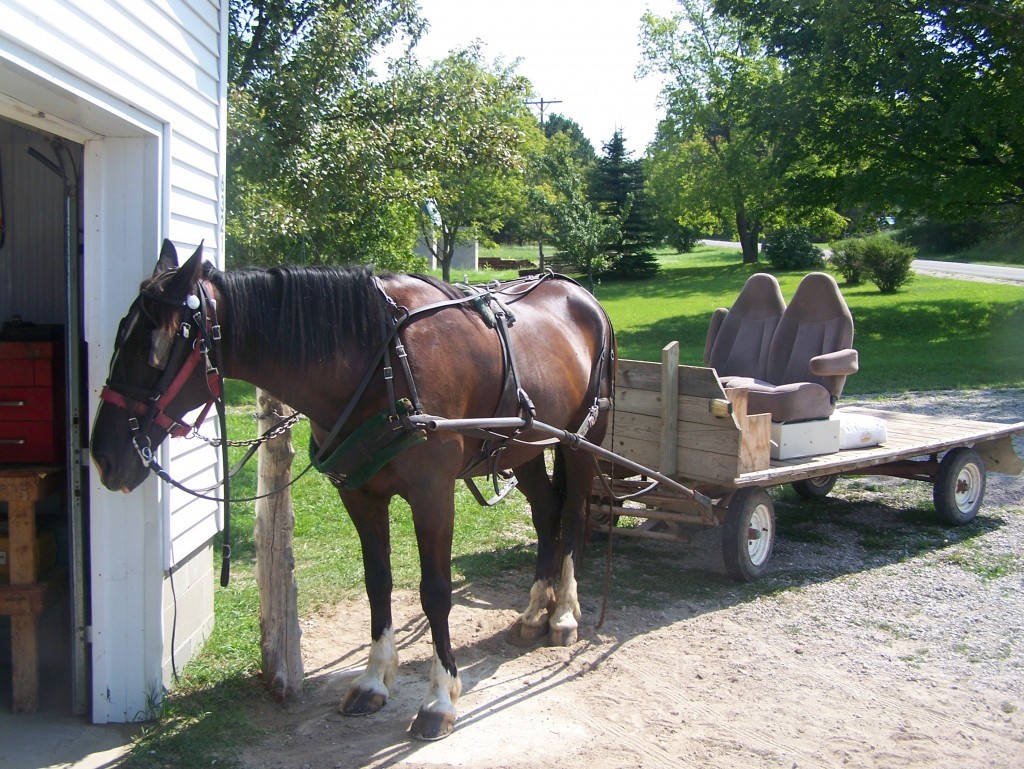 Van Seat Buggy:  This was one of the more unusual buggies I’ve seen, a flat cart outfitted with old van seats.

This family had a covered buggy but they wanted something to enjoy the wonderfully temperate northern Michigan summers.  Who wants to be cooped up in a buggy then?    The Amish woman living at the residence explained the funny-looking “buggy” like this:

“My husband bought these old van seats and fastened them to the cart. It makes for a really smooth ride,” she said.

Mustachioed Amish:   Amish men typically do not sport mustaches citing a long tradition of not.   Historically a mustache has often been associated with military service.  The pacifist Amish shy away from such associations.  But in some Amish settlements in Maine I have seen Amish men with mustaches.

College Amish:  In the Amish community of Partridge, Kansas I met a family who’s daughter went off to a Christian college in Pennsylvania to studying to be a teacher.  Amish teachers – or any Amish for that matter – typically don’t aspire to higher formal education.

Aviary Amish:  Meeting an Amish bishop in Virginia who runs Mountain View Aviary, an exotic bird breeder featuring Macaws, African Greys, Amboina Kings, Rosellas, Eclectus, and more .  It’s apparently a well-regarded aviary. If I recall there were even some college students studying ornithology who did some work there.  The Aviary has a Facebook page you can “like” here.

AMISH MISSIONARIES:  I met some Old Order Amish people who went on secret missionary trips to China to hand out Bibles.  Most Amish typically shy away from evangelicism, so that was surprising to me.