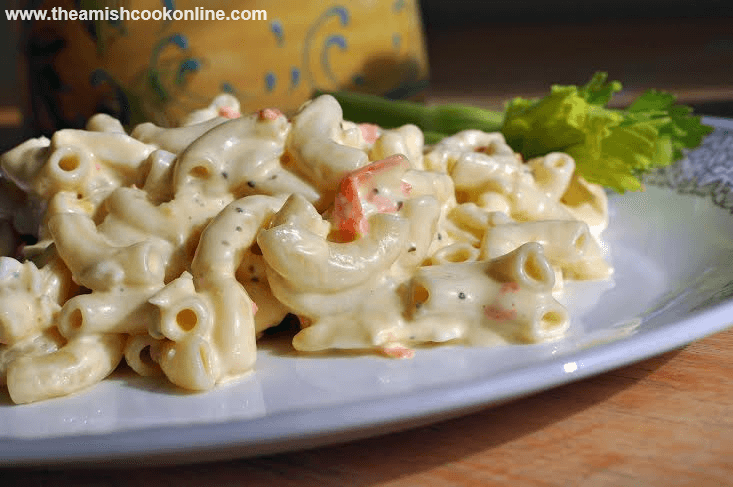 Amish Macaroni Salad..it almost came to a store near you....

All my writing about Kroger the past few days jostled loose a murky memory....

Those of you who have been with me a long time know that I've tried a gazillion things over the years to try to make The Amish Cook column solvent.  Some things have worked, most haven't.  In the end, it may ultimately be just heavier and heavier traffic to this site that does the trick. That said, it's not uncommon for brands to partner with manufacturers and grocers and I tried that many times to cement such a partnership in the 1990s and 2000s. I've written before about some of those branding attempts.

One of the better ones - I thought - was to partner with a Cincinnati-based produce company to make "wet salads."  In industry jargon "wet salads" are your potato salad, cole slaw, macaroni salads, etc.   So I supplied the company with some Amish Cook salad recipes that they went about formulating them for mass production.  And we came so close.  The salads were made by a Kroger owned commissary and Kroger even paid for the packaging, a sleek Amish Cook lid with the salads to be sold in small plastic tubs.  The salads would be made at their commissary in Greensburg, Indiana and Amish Cook salads would soon be sold in Kroger stores all over the Midwest.

But it was not to be....and, you know, looking back at it I'm still not sure what happened.  I mean, Kroger spent what had to be a fair amount of money on the packaging, their commissary tested the recipes and did a dynamite job with the recipes.  The problem with projects like that that are being done by such a large organization is that you (in this case me) gradually lose control and depend on other people to finish the job and it just didn't happen. If memory serves me right, it just bogged down in a bunch of bureaucratic intertia and just ultimately got shelved.

In retrospect, I wish I had done more to ensure that the people did what they were supposed to do to get the product to market.  But I was still very young at that time, probably in my late 20s, and I just don't think I knew how to work with a sprawling company like Kroger.   Maybe if the project were repeated today, we'd get somewhere...hmmmmm...tempting to make a call or two.....Anyway, Kroger did a great job at making the salads, probably my favorite was the macaroni salad which was made from this Amish Cook recipe: