Okay, the cake isn't that amazing. In reality, it's just "pretty good cake" probably.  But my taste buds are tugged by nostalgia and Bill Knapp's is, for many midwesterners, a brand that reeks of nostalgia.    My grandparents typified the Bill Knapp's customer: older and, well, older.  But there were a lot of grandparents there with grandkids and I was in the latter category.

The restaurant's motif was generally green.  They'd have some comic books inside the entryway so impatient kids could flip through them while waiting for a table (which was never a very long wait).  But the comic books were a nice touch.   The kids menu consisted of a  Giraffe, Bear, Seal, Elephant, Zebra or Lion.  I thgink the Giraffe was grilled cheese, the Elephant was chicken, etc.  On the adult menu, the potatoes au gratin were legendary.  The homemade biscuits were amazing. The chocolate birthday cakes were the epitome of birthday bliss.  And long after the last Bill Knapp's shut their doors, the cakes live on.  You can buy them in midwestern supermarkets.  I had the chance to tour the bakery where those cakes are made, probably about 10 years ago. 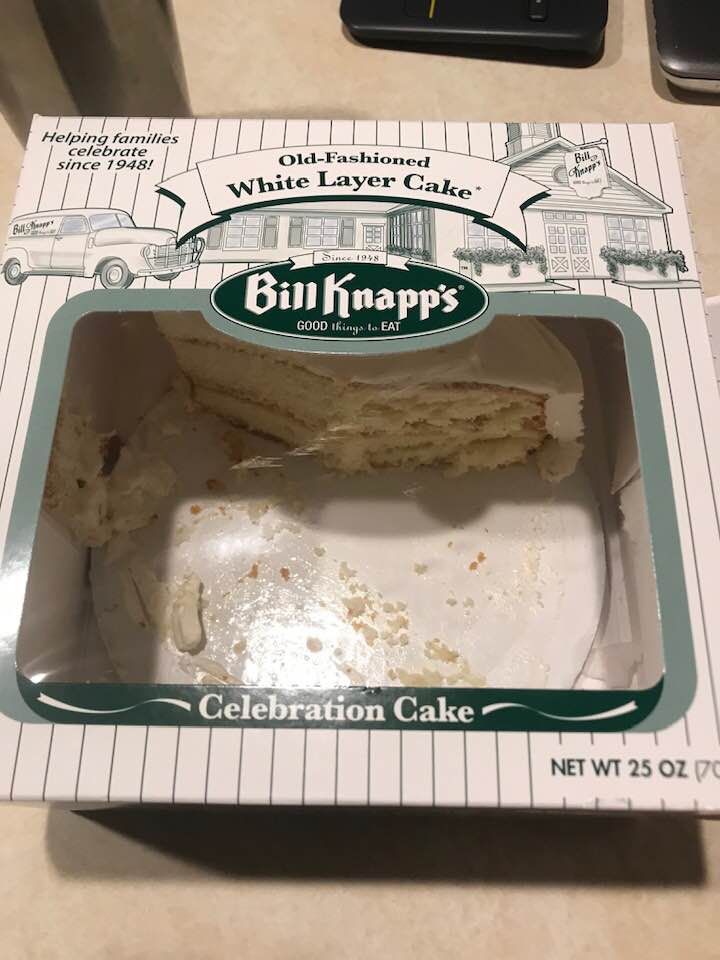 Bill Knapp's white cake...the chocolate was my favorite, though...

A baker in Michigan bought the recipe and the name license and now churns out the same Bill Knapp's cakes along with a vanilla version.   I'd have to think these cakes will slowly die out too.  As Bill Knapps's customer base ages and slowly dies off, the name Bill Knapps won't carry the same currency as it does with the younger generation.

My 15-year-old niece had this to say about the cake:

"I thought the Bill Knapp's cake was really good and I was curious about the company and if there was an actual Bill Knapp but there wasn't, if you must know it was founded by Clinton B. Knapp in Michigan and it's not even a company anymore, which is pretty sad.

But the actual cake..it was just simple vanilla but it had an almost lemony flavor which I wasn't expecting but I was into the vibe

So overall now that I know the history and have had the cake I think it's pretty bittersweet because it was a darn good cake that not many people get to experience now.

And then back to those au gratin potatoes.  They were really good.  I just remember them coming out always VERY hot and so cheesy and potatoey.  I may just have to make these so I can close my eyes and be transported back to my childhood....pass the comic books please...