KING SYRUP:   I wrote about King Syrup a couple of weeks ago and reader Sharon in Pennsylvania was kind enough to send me a bottle since it is not available in Ohio.  How sweet, literally, of her!   King Syrup is sweet.    But it is basically just corn syrup, right?

Apparently generations of people out east (Pennsylvania, Virginia, Maryland, it seems) have grown up on eating King Syrup on their pancakes.  And there are Amish and Pennsylvania Dutch cooks who simply won’t use anything else in their shoofly pies.  They’ll substitute the called for molasses for King Syrup which, again, is really just corn syrup, right? Or I am missing something?  You can order some directly from Amazon and try for yourself here.

I wasn't sure how to eat it, I didn't feel like whipping up pancakes.  So I just spread some peanut butter on bread and then squirted some King on it.  Funny because even though the label says it is corn syrup, it does seem to have a more "depth" of flavor.   I liked it and next time I have pancakes you better believe I'll try it again.  I'd love to hear other thoughts about King Syrup!

And, holy cow, you can get a booklet here containing 75 recipes with King Syrup in it.  Who knew?  Click here.

Chickweed enjoys a wide following in the Amish community and respected herbalists among them have touted its curative qualities for years.  We talked about the case of the Amish farmer in Kentucky who recently ran afoul of the law for selling chickweed salve that was mislabeled.  But the story brought to fore chickweed and its popularity.  Amish Country Essentials is a company based in Holmes County, Ohio that is run by soap and salve makers who have been practicing their craft for generations.   I am really looking forward to learning more about this company and their products and sharing more with you.  I bought some of their aluminum-free deodorant and really like it. 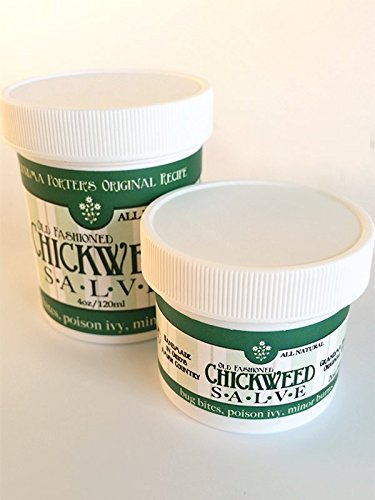 The chickweed salve intrigues me and I'll be trying it soon and reporting back, but I like what I see already. The Amazon description says it can be used as a topical remedy for eczema rashes, burns, poison ivy and chapped skin.  They have a two ounce and a four ounce container, so you can order a smaller sample size to test it out.  Order Amish Country Essentials Chickweed Salve here.