I have to admit I had never heard of "mashed potato candy" until I encountered it an Amish bakery in New York several years ago. I thought maybe it was called that just because it looked like mashed potatoes. So I asked the Amish baker if the candy really contained mashed potatoes and she assured me that it did.  So she gave me a few pieces to take home and was nice enough to share the recipe with all of us.  You really can't taste the potatoes...at least I can't, it's overpowered (or over powdered in this case) by the sugar...I think some creative Amish baker had a bunch of leftover mashed potatoes once and came up with this easy recipe.

Although the past couple of years has shown me that that candy in the New York bakery isn't a total rarity, many people have heard of mashed potato candy and consider it a sweet tradition.

A friend of ours, Jessica, decided to try making some with her leftover Thanksgiving mashed potatoes and here are her observations:

So. After I was so far in that I couldn’t change my candy making steps, I read that

a) Leftover Thanksgiving mashed potatoes aren’t a great idea because they contain so much milk and butter that it’s hard to get the consistency right in order to roll the “dough” out.

b) I read somewhere (another recipe) that they chilled the dough before rolling (great idea!)

c) they split the dough into two sections to be able to roll it out flatter and work with a smaller portion. If I was in a candy-making contest I would follow all of the above guidelines to make the prettiest candy.

However, for this recipe, I think the leftover mashed potatoes were ok. After I followed the instructions provided with your recipe, step by step, including chilling the cut candy pieces, I did trim them up a little to make for a prettier platter, which is why the final pics on the platter have more consistently shaped candies. (I also sprinkled a bit of powdered sugar on the dough, while rolling it out, to prevent the dough from sticking to the rolling pin, as you’ll see in my pics.)

Can Crunchy Peanut Butter Be Used In This Recipe?

Yes, in fact, if you like crunch and extra peanutty taste, that would be the route to go!

Can you add coconut to mashed potato candy?

It would add a bit more texture, so if you like coconut, go for it!

Not sure how important the sifting is, but you can do it if you want to follow the recipe exact. Sifting or no sifting, mashed potato candy is a treat! You can add other items to the mixture, like coconut, cocoa, and confectioners' sugar. Pecans or other nuts are another option. The old-fashioned mashed potato candy is a perfect dessert as you head into holidays when everyone seems to be having mashed potatoes. This recipe really became popular during the great depression because it was a sweet treat that didn't require expensive chocolate. And these can be stored in an airtight container and saved for a good week or so. There is also no baking with this candy, so it didn't cause one to use fuel supplier for an oven. And, you know, if you are watching calories and nutrition these aren't terrible. And the prep time is pretty minimal.

I may never look at mashed potatoes the same!

Yep, I might want to try crunchy peanut butter on this sometime! Or, better yet, Nutella!

Here are some more finished photos! These are an old Pennsylvania Dutch favorite, found commonly at family gatherings in the eastern United States. The tradition was brought over from Germany. Sometimes these are even rolled in melted chocolate. There are many a variation on this dish.

So, those are some good tips, insights, and suggestions from Jessica who, by the way, said the candy was delicious. Also, the original instructions say to sift the powdered sugar and Jessica did do that. Not sure how crucial that step is, I might be inclined to skip it. Now, whip out some mashed potatoes and make some delicious Amish mashed potato candy.

The Amish celebrate the season through candy, here are some ways!

Three Amish Candy Recipes From the Settlement in Oakland, Maryland

Butterscotch Cornflake Candy sounds amazing, but so do all three of the recipes! 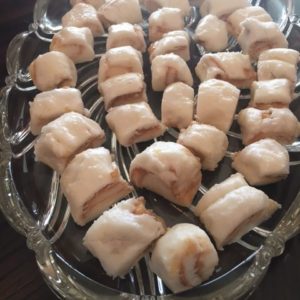