Ham is popular year-round in Amish kitchens, most get their supply during the late-wintering butchering season.

Whether it’s butchering beef, pork, or poultry, the cold months mean stocking up on meat which means you can enjoy it year-round including in the hot month of August. Butchering is a hot, messy job that the whole family pitches in to accomplish. Who wants to be up to their elbows in lard and beef on a roasting July day? That’s why the hard work of putting up meat is done during winter. February is a popular month. The bustle of the holidays are behind and the task of putting out a spring garden lays ahead. The butchering is often done outdoors or in a shed so a cold winter’s day will  keep the meat fresh. During a frigid February flies are non-existent and the work isn’t as grueling. 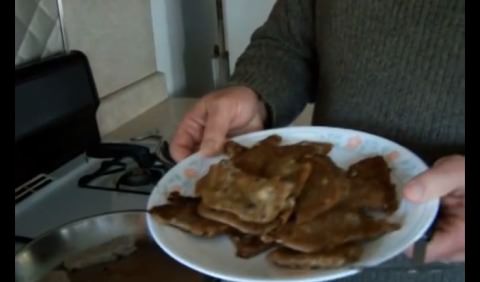 A favorite dish among the Amish at hog butchering time is a dish known as pon hoss (or haus). It is more widely known by the name “scrapple.” As the name implies, this is a pork dish comprised largely of “scraps”, portions of the pig that might not be part of one’s Christmas ham.

But ham, pork, bacon, side meat, etc are all popular year-round.  Try this casserole!