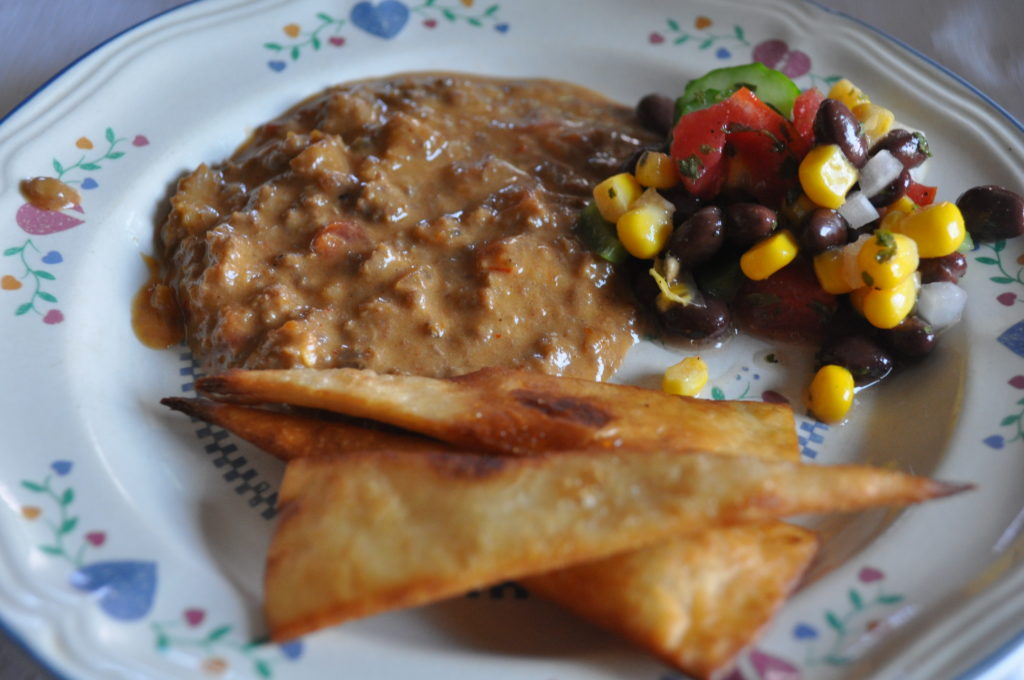 Baseball is still the pastime of most Amish.  Football is popular among some, but not nearly to the extent baseball is. I think the tough tackles and roughness of football make it a poor fit for the generally pacifist Amish.  But that doesn’t mean The Amish Cook can’t supply us with a few Super Bowl munchies.  Oh, and I don’t really care who wins.  I’ll watch the game for the commercials, the half-time show, the food and, yes, I do enjoy seeing some good football (Like the Amish I’m far more a baseball fan).  Now if my beloved Cincinnati Bengals would ever make the Super Bowl, watch out, I’ll suddenly be a huge football fan.  But until then I guess I’ll stay away from the “deflategate Patriots” and root for Seattle!

There are several things on this “Super Bowl” plate that are eye-catching.  First the brownish-colored dip is delicious, that is the beanless bean dip.
“We call it bean dip, but there are no beans in my version,” Gloria says.  “And it’s never the same when I make it.”

Like a typical Amish cook, she often just makes stuff from memory and experiments and varies as she goes along.

Those chips are AMAZING….take it from me, I completely cleaned this plate when I last visited.

“This is something that we love to have for our Sunday night supper.   The chips are deep fried tortillas, cut into wedges and strips and deep fried in hot oil until golden brown.  Flip mid-way through leaving them in the oil just until brown on each side.  Daniel really likes these. His  face lights up when I make them.” Gloria says.

The other item on the plate is a corn-bean relish that is a specialty of her mother’s . Gloria will share the recipe sometime in the summer of 2015 when veggies from the garden are fresh and plentiful.