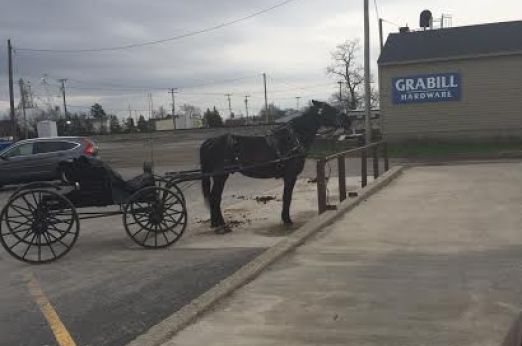 A buggy parked outside Grabill Hardware and old-time hardware store.

Well, my modest goal of hitting two new Amish settlements (new to me) has been accomplished this year and its only April, so I have hopes for more.  I visited Degraff, Ohio in February and on Thursday I spent time in Grabill, Indiana.  And, wow, I've been missing out!  As someone who studies Amish culture, Grabill is a fascinating stew of various Plain groups.  There are Mennonites, charity churches and a huge contingent of Amish.

Language: Mixture of Swiss and Low and High German

The Global Anabaptist Mennonite Encyclopedia put this settlement's population at 2735 in 2011 but I think it is safe to say that they'd be well over 3300 by now.....

Visitors:  You know,unless I am missed something, there's not a ton in Grabill to do for visitors.  That doesn't mean it's not worth going to Grabill.  After all, the Amish don't exist to be tourist attractions, they are a real people living in a real community and this is a very vibrant unique settlement.   But I think many Amish men work in construction, contracting or carpentry in this area instead of running home-based businesses or farming.  That's not to say there aren't any Amish businesses for visitors to sample, I'll talk more about those in the coming days.  But there just aren't a ton considering the large population.  For example, in tiny Hardin County, Ohio's Amish settlement there are dozens and dozens of home-based businesses from toy shops to bakeries and you just don't see that in Allen County.  There are plenty of homes offering fresh eggs (I came away with way too many).

Probably the "don't miss" place in Grabill is Grabill Country Sales, a huge bulk food store and buffet.  The business is Amish-owned and the buffet and deli is amazing.  The business is owned by Elmer Lengacher.  He is an entrepreneurial Amishman in the area who even owns the local Save-A-Lot grocery store!  Grabill Country Sales even has a website.   The Grabill settlement is the only one where you'll run into the surname Lengacher in such large numbers.

The Amish here are definitely more permissive when it comes to allowing technology into their business lives.

I experienced a lot in Grabill during my short time there. Next week we'll explore Grabill more in depth!