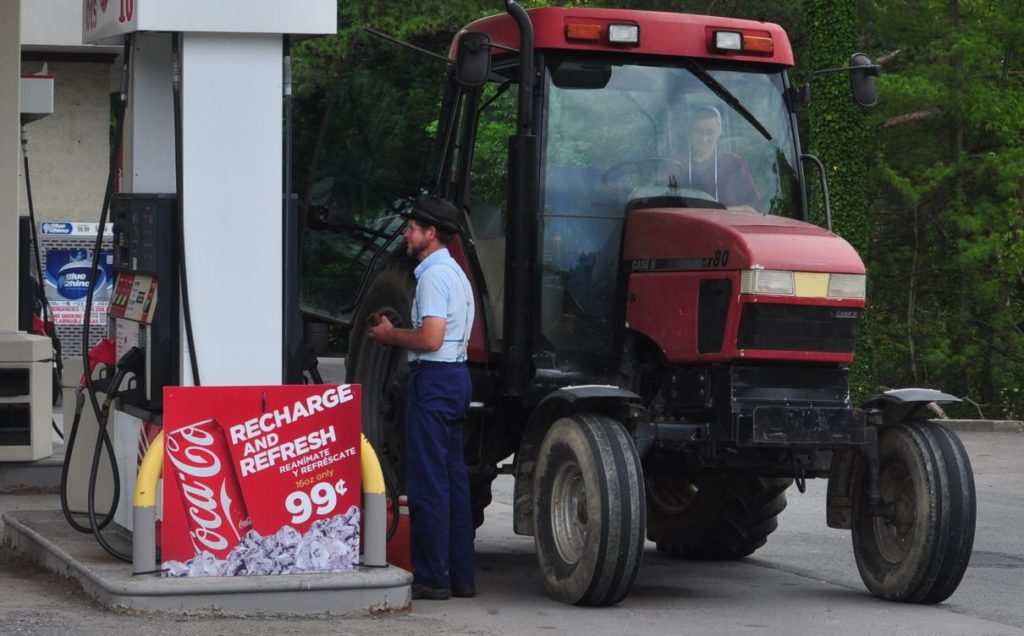 Paying at the pump, the Amish of Oakland drive big tractors into town.

The Amish community is located in the shaded red area near the southern tip of the county, surrounded on 3 sides by West Virginia.

This is going to be the first of several posts over the weeks ahead about the Oakland, Maryland Amish settlement which I was able to spend some time in last week. I was working on a special project, which I'll talk more about next month.

The community is nestled in the mountains in the far, far western end of Maryland.   The church was established in 1849 and some of the direct descendants of the founding families still populate the church.   This really is an isolated area.  The closest "big city" - if you can call it that - is Morgantown, West Virginia an hour away.  Oakland isn't a place you just stumble upon, it's a purposeful destination.

I think the isolation has allowed this community to evolve and sort of develop their own rules and rhythms. There are several unique items to the Oakland settlement:

SIZE:  At 72 families this is probably the largest single Amish church district in the USA.  Most Amish churches don’t grow beyond 25 families before dividing and growing.   The church here has discussed dividing in the past but the idea has always been nixed.  The bishop has said “we’ve been one church since 1849, it’s difficult to decide to divide.”

SCHOOL:   The Amish school here isn’t Amish at all, it’s a public school that happens to be mainly Amish. But a handful of Mennonite kids attend and 5 Southern Baptist students are among the ranks.  But the school is governed entirely by public school rules.

PROGRESSIVISM:   The Oakland, Maryland  community has been gradually drifting progressive.  For most of its early years it was Old Order, then New Order and now it is New New Order.   The Amish here are permitted electricity in their homes (but no TV, radio, internet, etc) and horse and buggies are infrequently used, instead many drive tractors for their personal transportation.   Most use tractors for farming although two families still farm using horse-drawn implements.  Non-Amish locals seem to prefer that the Amish use tractors instead of buggies because they are faster on the winding, two lane roads in the area. No buggy traffic jams to worry about.  Most all Amish do own buggies and they do use them, but mainly for attending church and other very local functions.  In this sense, the Amish here very closely resemble groups in Partridge, Kansas and Guthrie, Kentucky.

CHURCH:  This community has their own church building where worship is conducted. So some people joke that the homes are messier here since no one ever has to do the extensive cleaning that most Amish do once or twice a year prior to hosting church.

Unlike many Amish settlements farming is still very dominant here, but there are also many businesses mixed in:  construction, bakeries, bulk foods, engine repair and the like.

The Amish community sits at the base of Backbone Mountain, Maryland’s highest point.  The growing season this high is short. One of the residents said they don’t put tomato plants out until June 1 “to be safe” but that frost has occurred as late as the first week of July and winter comes early in the mountains…frost has been experienced the last week of August.

I had a chance to make some great new friends, sample some wonderful food and visit some neat businesses, I’ll be sharing more in multiple posts over the weeks ahead.